Beginning Nov. 29, the stories of African Americans in aviation history, and what they had to overcome, will be part of the special exhibition “Black Wings: American Dreams of Flight” opening at The Haggin Museum, 1201 N. Pershing Ave. in Stockton.

Presented by the Smithsonian’s National Air and Space Museum, Black Wings examines the contributions of some of the most important African American aviators from the past and present who helped make their dream of careers in flight and space exploration possible.

< p>Two of the many figures presented in this exhibition are Bessie Coleman, the first African American woman to obtain her pilot’s license, and aviator William J. Powell. who led an ambitious program to promote aviation in the African American community.

Divided into six sections, Black Wings chronicles the evolution of aviation through the stories of African Americans who dreamed of flight, left their mark and helped pave the way for those who would follow.

Other aviators whose contributions are explored include the Tuskegee Airmen—the first military division of African American pilots who fought in World War II—and Mae Jemison, the first African American woman to fly in space.

The exhibition is based on the 2008 HarperCollins book “Black Wings: Courageous Stories of African Americans in Aviation and Space History,” by exhibition curator Von Hardesty of the National Air and Space Museum.

The exhibition’s national tour is organized by the Smithsonian Institution Traveling Exhibition Service (SITES) and was made possible by the support of the MetLife Foundation. The exhibit ends Jan. 12.

Habitat For Humanity Builds in Novato

Baccalaureate Programs at Community College: A Wise Investment in Our Community,... 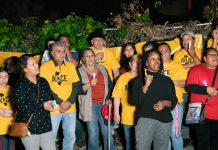