Congresswoman Barbara Lee visited Oakland’s Private Industry Council’s Career Center at 1212 Broadway in Oakland on Thursday morning to show her support to 23,000 local residents whose unemployment benefits not being extended.

Congressional Republicans refused to back the extension, saying it would cost the country $26 billion over two years. Now more than 1.3 million Americans nationally will be without an income.

“This is a shame and disgrace,” said Lee, add that she is “beating the drum” to raise awareness about the issue and to let people know that some members of Congress understand their dilemma.

She also said legislation is in the works so those who lose their benefits can be paid retroactively the compensation that they deserve once Congress reconvenes in January.

In Oakland, unemployment rates remain high, as job seekers are at the mercy of an exceptionally tight labor market. The loss of unemployment benefits makes their lives that much worse, according to Gay Plair-Cobb, Chief Executive Officer at the Private Industry Council.

“(The) bi-partisan compromise bill certainly compromises the stability of those without jobs,” she said. “Have we also compromised our values as a great society?”

Tina Lee, an unemployed Oakland resident, said she hopes the retroactive payments will be forthcoming. She says she hasn’t gotten a check since the government shutdown in October.

“I’ll have to depend on family and friends to help see me through while I continue my training program,” she said.

She says her phone service was recently suspended, and now she doesn’t have a way for potential employers to try and reach her. She also says she recently had to end her Internet service because she cannot afford it, further affecting her ability to search for a job.

Congresswoman Lee says the main reason for her visit was to meet people like Tina Lee, to put faces to the numbers being reported.

“These are real people, they’re not statistics…. They’ve got families, they’ve got children,” said the congresswoman.

M. Lisa Bowie-Moon, 56, Skyline Graduate Passes With No Regrets for Her Life

Raiders upset Steelers with late comeback in the fourth 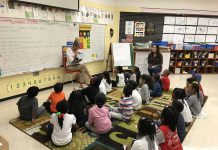 Peavy Not The Answer, Giants Get Swept