Rev. Al Sharpton, nationally known civil rights leader and founder of the National Action Network (NAN), was the featured guest pastor at Beebe Memorial Cathedral in Oakland, Sunday, Feb. 2, where Sharpton spoke passionately about the need to reignite the fight for social justice, helping to inaugurate the NAN Oakland chapter.

“The seeds of social justice were planted in Oakland that helped change the paradigm for Blacks and other people in this country,” said Sharpton, who emphasized that much has yet to be done.

“Dr. King’s dream has made great progress, but we are still facing race, income, gender, sexual orientation inequality and criminal justice issues. We need action in a strategic way from the streets to the suites,” he added.

“Our focus is education and crime prevention,” he said.

Rev. Hames said that Oakland NAN will be an action-oriented organization and will work in concert with other local groups, “We are here to compliment other local agencies,” he said.

“Where other agencies are weak we want to be strong. Where their agenda is bureaucracy. we want to create action.” 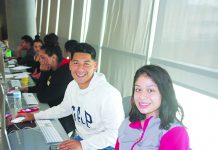 ABOUT US
The Oakland Post is one of eight weekly newspapers Serving the San Francisco Bay Area. Each paper seeks to provide awareness of issues and current events of concern in Bay Area minority communities.
Contact us: conta[email protected]
FOLLOW US
© Post News Group. All Rights Reserved. Powered by Embtel Solutions, Inc.