San Francisco, CA – The Giants tried to even the series but failed when the Nationals scored three runs in the first frame. Matt Cain took the mound after a stellar outing during his last start. But tonight, it was all but successful for the right-hander. For the third consecutive night, San Francisco could not contain Washington’s offense and fell 6-2.

“I was just missing off the plate and I couldn’t get the ball back on the plate for some reason to the first three hitters,” said Cain. “I made an OK pitch to [Adam] LaRoche and he hit it up the middle. I put our guys behind the eight ball. That was too much of a deficit to come back from.”

Cain issued four walks in one inning which is a career-high for the most he’s allowed in a single frame. The last Giants pitcher to issue four walks was LHP Eric Surkamp on September 24, 2011 at Arizona (bottom of 1st). San Francisco pitchers issued a season-high eight walks tonight.

“I’ve never seen that from Matt,” Nationals manager Matt Williams said. “I’ve stood in that coach’s box over there a lot. Ninety-nine-point-nine percent of the time, he’s playing with his control.”

Cain walked the first three batters he faced and allowed a two-run single to LaRoche giving Washington a 2-0 lead with no outs. The Nationals extended their lead when Ryan Zimmerman grounded out to the pitcher scoring in Jayson Werth.

“We’ve hit a little bump in the road,” said Giants manager Bruce Bochy. “What’s important is how we handle it.”

It’s been unusual territory for San Francisco to have lost three games consecutively. Despite still holding the best record in the Majors, the Giants loss tonight matched their season-high losing three games (April 17-19).

Cain settled down and tossed three scoreless innings until he surrendered a solo home run to Werth in the fifth. That ended his time on the mound. He pitched five innings, walked five, yielded four runs and struck out four.

“We started the game off and we got some really good at-bats,” Werth said. “We kind of got Cain on the ropes early. We got his pitch count up. We got some big hits. The first inning kind of set the tone for the game.”

The Giants have been held to just three runs in their past two games and have gone 3-for-14 with runners in scoring position in the first two games of this series. San Francisco has not hit a home run in a season-high five-straight games.

Brandon Crawford’s RBI triple put San Francisco on the board in the fourth. The Giants rallied late in the seventh when Tanner Roark allowed two back-to-back singles to both Brandon Hicks and Gregor Blanco. But the bullpen came in and forced a double play leaving one runner on.

Pablo Sandoval whose been battling an illness, pinched hit and knocked a RBI single to right field cutting the lead in half. Unfortunately, Angel Pagan popped out to right field to end the threat. And if things couldn’t get worse for San Francisco.

Yusmeiro Petit loaded the bases in the ninth with two outs. He allowed a single from Jose Lobaton and forced pinch-hitter Greg Dobbs to ground out. Petit walked the next two batters then gave up a two-run single to Werth to extend the Nationals lead 6-2.

Notes – In the last few games the Giants have relied on the bottom of the order to muster some runs. While their at-bats are cooling off, San Francisco still has talent to pick up the slack. The Brandon’s excluding Brandon Belt who is currently on the dialed list have proved hitting 7th or 8th is just as good.

“No necessarily, he doesn’t have to,” said Brandon Crawford when asked if manager Bruce Bochy has talked to him about how well he’s been doing. “Wherever I am, it’s my job is to get hits. The focus is still the middle of the lineup but [Brandon] Hicks and I have been doing a pretty good job of getting guys on.”

Crawford has gotten on base successfully in each of his last ten games. His 35 RBI’s this season rank as the second most on the club. He’s already 12 RBI’s shy of matching his career-best for a season (45 in 2012). Crawford has hit a team-leading fifth triple of the season and is now tied for second most in the National League.

“I like the way he’s swinging right now,” Bochy said. “He’s squaring up the ball pretty good right now and we moved him up the lineup.”

“I haven’t change anything but I guess I’m being more aggressive even on off-speed pitches,” said Crawford. “I’m swinging especially with guys on. That was the goal from the beginning to play everyday and contribute to this team wether it’s a righty or lefty.” 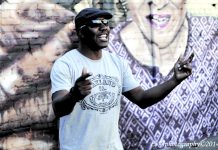