San Francisco, CA – Matt Cain just can’t catch a break. He suffered his third straight loss and his sixth overall this season. Cain got no run support tonight as the Giants were shutout 6-0 by the Padres. He’s received just six runs of support over his last five starts.

“I had chances to get out of those innings and I didn’t make the pitches that I needed to,” said Cain. “And that ended up costing us those runs in the fourth inning. I had an opportunity to get out of that without any runs but I made two big mistakes.”

Cain held a pretty good start until the fourth. He retired the first three batters he faced, walked Carlos Quentin and then retired the next six batters. Everth Cabrera grounded to first baseman Michael Morse who threw to Cain who tried to out run Cabrera to first for the out but he was ruled safe.

Seth Smith followed Cabrera’s infield hit with a single before Quentin lined out to Pablo Sandoval. Yasmani Grandal hit what looked like a double off the right field wall but it was ruled a three-run homer making it a 3-0 game.

“The one (pitch) to Grandal was really bad and the pitch to [Tommy] Medica wasn’t terrible, maybe I could’ve thrown it lower or maybe a little further away from him,” Cain said.

The previous play was under review after a fan reached over the wall in right field to catch Grandal’s fly ball. After the review the call was overturned and it was ruled a RBI double making it a 1-0 game in the fourth. But San Diego quickly added on two more runs extending their lead.

Medica hit a two-run double giving the Padres a 3-0 lead again. San Francisco tried to respond putting their first runner on base bottom of the frame. Hunter Pence knocked a double to center field and broke up Odrisamer Despaigne’s perfect game after he retired the first ten batters he faced.

Despaigne recorded his first win in his Major League debut. He became the fourth pitcher in San Diego’s history to pitch 7.0 or more shutout innings in his first Major League game joining just three others. Despaigne also became the second Cuban-born pitcher to ever appear in a game for the Padres.

“I got a plan with pitching coach [Darren Balsley],” Despaigne said through an interpreter. “I was trying to keep the ball down, especially with that kind of offense. I was trying to get the hitters to see different speeds and different breaking balls.”

Despaigne tossed seven innings, allowed four hits and one strikeout. San Diego provided stellar defense and backed their ace by opening up their offense in the eighth scoring three more runs while chasing Cain off the mound in the process. Cabrera hit a RBI single and an error by second baseman Joe Panik scored in Will Venable.

A throwing error from Pence scored in pinch-hitter Jake Goebbert moving Cabrera to third. Smith followed with a RBI doubled to extend the Padres lead 6-0. The Giants had only four hits through seven innings off Despaigne. The bullpen took over and didn’t allow one batter on base in the eighth and ninth frames.

San Francisco has lost seven of their last eight games at AT&T Park. Tonight marked the first time the Giants have been shutout by San Diego since Sept 11, 2010 at Petco Park. The last time they were shutout by the Padres at home was May 13, 2010.

Notes – The injuries have taken a toll on the Giants but no worries, they’re still quality players to be called up. Infielder Ehire Adrianza was placed on the 15-day disabled list today with a right hamstring strain. Juan Perez was called up and will be activated for tomorrow’s game. Still no word on if leadoff hitter Angel Pagan will go on the disabled list with back spasms.

With second base in flux due to injuries, the Giants called up second baseman Joe Panik who made his first career start in the bigs yesterday in Arizona. He went 2-for-4 with a double and RBI. Panik had his contract purchased from Triple-A Fresno, marking his first call up to the Majors. He was San Francisco’s first round selection (29th overall pick) in the 2011 Draft.

“I’ve been waiting to be here since I was drafted in 2011,” said Panik. “Last year and this year I’ve been playing second base. The biggest adjustment has been the footwork and turning double plays. But I got a little work with [Brandon] Crawford in Spring Training so I’m comfortable.”

“He’s adjusted pretty quick,” Crawford said. “He’s a good hitter with a good approach. No big adjustment for me working with another new second baseman. We’re 2-0 with him so far so, that’s a pretty good start.” 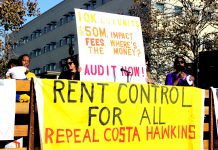 “There Is No America Without the Physical Plunder of Black People,”...