When the City Council adopted this year’s Workforce Investment Board (WIB) budget, councilmembers voted unanimously for the WIB to come back with a plan on how to “put some skin in the game,” that is, figure out how to contribute money to supplement declining federal resources for jobs and job training.

Now more than three months later, the WIB presented an informational report to this week’s Community and Economic Development committee meeting – with no proposals on how to help pay for jobs programs.

“There are no general funds budgeted for (Workforce Investment Act) Administration in the (Fiscal Year) 13-15 budget. Staff will request System Administration support funding for consideration during the fiscal year 16-18 City Policy Budget Process,” the report said.

Yet the city continues to take over 30 percent of federal jobs funds for administration – to pay for its workforce development and other staff, according to Gay Plair Cobb, CEO of the Oakland Private Industry Council (PIC), which operates the downtown One-Stop Career Center that provides services for the unemployed.

“Does the city actually think it should spend the same amount of job training money to support seven (staff) people as it takes to support the downtown career center, which receives tens of thousands of visits a year by job seekers?” Asked Cobb, speaking at Tuesday’s CED meeting.

“The city puts not one dime into (these programs), and the consequences could be quite dire,” she said. Career center staff “have taken 20 percent cuts in their already modest salaries to keep the doors of this center open,” she said.

“I don’t think this is what this city wants, and I know it is not what the people of Oakland deserve,” said Cobb.

Contacted by the Post, Mayor Jean Quan has failed to answer questions about why she has allowed the proportion federal job money taken off the top for city administration to rise over the course of her term as mayor.

She was asked but did not reply to the question: why does the city contribute nothing to augment declining federal Workforce Investment Act funds?

With PIC staff taking pay cuts, the situation is already dire, said mayoral candidate and former chair of the WIB board Bryan Parker, speaking at the meeting.

“I would like to underscore the request to do something about those monies,” said Parker.

He said the city’s overhead is close to 32 percent of the federal jobs funding. “That’s a historic high –it should be closer to 20 percent,” said Parker, adding that if the city cannot lower the costs of overhead, “it should turn administration over to someone who can get it down to 20.”

“The need is too great – we need more money on the streets and directly helping the people who need it,” said Councilmember Libby Schaaf in an interview with the Post after the meeting. “We need to be more aggressive in seeking public-private partnerships and growing the pie to create more job resources.”

Added mayoral candidate Dan Siegel, “In the course of meeting thousands of people in my campaign, I have heard two things: people want jobs and job training, and people want to see a city government that is efficient and more user friendly.”

“The city’s treatment of the Private Industry Council (which operates job programs) demonstrates failure in both those regards.”

Complaint Filed Against Oakland Unified for “System-wide Violations of Rights of... 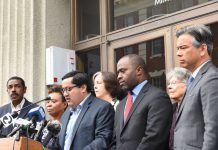 Trayvon Martin: Shatters Myths That Blind Us to Reality

Community Campaign to Save Planetarium Shows at Chabot Space & Science...