California approved a major shift against mass incarceration on Tuesday in a vote that could lead to the release of thousands of state prisoners.

Under ballot measure Prop. 47, nonviolent felonies like shoplifting and drug possession will be downgraded to misdemeanors. As many as 10,000 people could be eligible for early release from state prisons, and it’s expected that courts will annually dispense around 40,000 fewer felony convictions.

The state Legislative Analyst’s Office estimates that the new measure will save hundreds of millions of dollars on prisons. That money is to be redirected to education, mental health and addiction services – an approach that reform advocates hope will serve as a model in the larger push against mass incarceration.

Prop 47 received 58.5 support of state voters. This big margin of victory should further propel reform in some places because it proves that significant numbers of voters are willing to back lessening criminal penalties.

“This is possibly the most important and progressive piece of legislation that we’ve seen to date addressing mass incarceration and the criminalization of people of color, particularly Blacks,” said Rev. Michael McBride, pastor of The Way Christian Center in Berkeley who has advocated against mass incarceration for the past 15 years.

He adds that this new legislation “reminds us of this very important Christian principle that no one should be defined by the worst thing they’ve done in their life.”

McBride, the Director of Urban Strategies and the Live Free Campaign with PICO, says this victory also teaches a lesson to politicians that are courting the Black vote.

“This demonstrated that we show up when it is something that accesses our misery and our own pain. It’s a lesson to every political party and leader who seeks to have the Black vote,” he said.

“When elections and laws and candidates appeal to very concrete concerns of our community, we turn out to vote and we’ll engage very powerfully in the electoral process.”

Will You Vote in the CA Democratic Primary?

The Path to Eradicating Ebola

“We Do Not Need This Flying Invasion of Privacy” 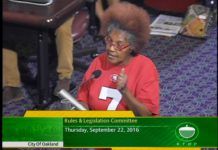