Libby Shaaf was elected as Oakland’s new moderate mayor because she offered reasonable substantive, practical solutions to many problems facing Oakland, rather than sniping at her opponents.

The incumbent was too busy congratulating herself for her mediocre results. Others seemed either content to run a popularity contest or they gave rote answers based on their ideologies rather than offer any substantive solutions.

Libby, instead, connected with voters on the issues of crime, education, jobs, and housing. She built a track record as an implementer and problem solver, which helped her assemble a refreshing, diverse coalition of supporters.

After a blizzard of mailings, I reflected on one of my grandfather’s sayings, “Stop telling me what is wrong, tell me how you are going to right it.” Unfortunately, many politicians simply think that being liked equals being able to govern. Hopefully Libby Schaaf’s election could signal an era of substantive politicians.

After serving on the council budget committee, Libby knows that we cannot simply continue to raise taxes to pay for an inefficient and ineffective city government. She has shown a willingness to tell the sacred cows that changes will occur.

For example, reform the police budget by hiring civilian workers to do some jobs that patrolmen are now doing. And there is no reason minor crime is responded to by full-uniformed officers. A simple budget solution is to hire civilians to take a report.

Libby also recognizes Oakland police cannot be an out-of-town force who looks at Oakland as a battleground. Community policing works because the officers become a part of the area they serve, not just a visitor. Having a visible presence in neighborhoods is much more effective than simply responding to 911 calls.

And speaking of which, Oakland spent millions of dollars for an ineffective, dysfunctional computer system. Yet, the previous mayor and many candidates showed no interest to raise these questions, including our auditor.

Libby identified the problem and pushed her colleagues to reform. Libby says she will support quality education plans. She also recognizes that Oakland needs a diverse jobs base, and a diverse housing stock to help attract employers to Oakland. Libby also showed an understanding of the impact city policies and taxes has on everyday citizens.

She came up with reasonable solutions to parking that alleviated excessive ticketing while making more parking available in District 4. Because of her responsiveness and service to District 4, Oakland now has a mayor who will move us in the right direction.

So now we know why Don Perata endorsed Bryan Parker. Once again he got played; the fact that Ruby, Parker, and Tuman’s spoiler strategy of telling everybody to vote for just the three of them didn’t work.

Clinton Killian is an attorney at the downtown Oakland law firm Fried & Williams LLP and former public official. He can be reached at [email protected]

Time Is Up! Reparations Now, Maybe, Or Never! 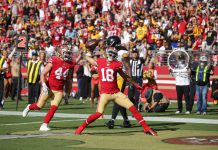