“ A Democratic ticket is the clear ticket that we should be voting on, regardless of who said what or did this – that shouldn’t even come into the equation.” ~ First Lady Michelle Obama, TV One interview with Roland Martin

“Our community organizations and churches mobilized to encourage early voting opportunities with programs like Souls to the Polls. Black elected officials crisscrossed the country to discuss the urgency and the importance of this election. We phone banked, knocked on doors and held Get out the Vote rallies” said Congressional Black Caucus Chair Marcia Fudge.

Andthereward for this gargantuan voter drive effort is again NOTHING!

Why was President Obama’s press conference the day after the election silent on remedies for the black community? Again there was silence on education; crime; unemployment and the overall diminished opportunities for blacks in America.

Jennifer Oliver O’Connell stated, “the president has made sweeping executive orders to benefit gays, Hispanics and women, but beyond speechifying has done little for blacks.”

Where is the Dream Act for black children, the highest demographic of the unemployed? The affects of illegal immigration has been cataclysmic to the black community.

Carol Swain, professor of law at Vanderbilt University and author of Debating Immigration states, “Illegal immigration hurts low-skilled, low-wage workers of all races, but blacks are harmed the most because they’re disproportionately low-skilled.”

Labor economists have concluded that undocumented workers have lowered the wages of U.S. adults without a high school diploma – 25 million of them — anywhere between .04 to 7.4 percent. A National Bureau of Economic Research paper found that immigration accounted for about a third of the decline in the employment rate of the least educated black men over the past decade.

The evidence of the damages of illegal immigration on the black community is beyond debate as I searched for a singular report to support the contrary and found none. At a time when the most fragile and hurting demographic in America is the black community, how can this president remain silent and refuse to help or offer remedy but would instead offer further injury to the black community. Shameful!

I strongly disagree with Michelle Obama, the things said and done should always enter into the equation when we consider how we are to cast our vote. The black community must refuse to continue to be the cheap date for the Democratic Party.

Let this be the last election that black Americans have given their vote away, let us join with the rest of Americans and make all politicians and all Parties EARN the black vote – what a concept.

Opinion: How the Coronavirus Has Reshaped Wall Street

Man Of The Year, Anquan Boldin 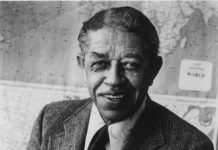 “All I did Was Shoot My Man,” New Mystery by Walter...