Over 100 protesters shut down Emeryville Home Depot last Saturday, demanding, “We want answers!” about really happened in the killing of Yuvette Henderson by Emeryville police earlier this month.

The demonstration, organized by #BlackLivesMatter, Anti-Police Terror Project (APTP), #Asians4BlackLives and Xicana Moratorium Project, lasted from about noon to 5 p.m. Protesters played Malcolm X speeches, chanted and chained themselves together to block customers from entering.

They are demanding Home Depot release video footage of the entire scene.

“Home Depot has cameras on the inside and on the outside of the store. They need to allow the public to see what really happened,” said one demonstrator.

The protesters listed their demands on a sign that said “Justice for Yuvette” that was attached to a large wooden tower they set up in front of the store.

According to police, Henderson, a 38-year-old mother of two, was attempting to shoplift from the Emeryville Home Depot.

When she was confronted, she pulled a “black revolver” on Home Depot’s loss prevention guards and fled. While attempting to escape, she was met by Emeryville polices officers and was shot and killed with an automatic weapon on Hollis Street, according to reports.

An edited version of an audio recording of the Home Depot loss prevention security call to police was released on Friday, Feb. 20. The recording stops where the security guard said that it looked like she pulled the gun on the police.

Oakland and Emeryville police departments have not released video evidence, nor have they given any details about the weapon Henderson allegedly had in her possession.

Organizers shut down Home Depot for five hours to represent the time Henderson’s body allegedly lay in the street before it was removed.

Local activists say that if Henderson was shoplifting, this should not mean a death sentence.

“Our police offers are not judge, juries and executioners,” said Cat Brooks, co-chair of the Onyx Organizing Committee.

Raiders Lose Tough One Against Titans 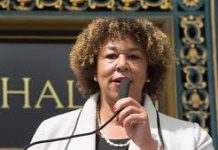