This week, the independent commission convened by Missouri Gov. Jay Nixon in the wake of the Michael Brown Jr. killing in Ferguson, Mo., released its report: “Forward through Ferguson: A Path toward Racial Equality.”

The commission’s 16 volunteers were tasked with doing a “thorough, wide-ranging and unflinching study of the social and economic conditions” that impede progress in the St. Louis region.

They have provided a compelling document, detailing concrete reforms that would begin to address the entrenched reality that lies behind the Ferguson troubles: a society that is still divided by race, still too separate and unequal. Nearly 50 years after the Kerner Commission Report in the wake of the urban riots of the 1960s, America remains divided.

The commission does not hide from the truth: “We know that talking about race makes a lot of people uncomfortable. But make no mistake: this is about race.” “(R)ace remains at the root of the violence, as … every riot studied” is the “result of white law enforcement harming a black civilian.” “We have not moved beyond race.”

Failure to address the economic mobility of poor children is projected to decrease the United States GDP (gross domestic product) by about 4 percent per year over the lifetime of these children, costing the entire country about $7 trillion (Putnam, 2015). “These divides we’ve created,” the commission reports, “between Black and White, between rich and poor and middle class — are bad for all of us, not just some of us.

The commission allows that there are no easy answers but that inaction is not an option anymore. They understand that the citizens they address may live in very different realities.

“If you live in a safe suburb, and you’ve got a good job, and you’ve got health insurance, and you never worry about your kids’ schools, and you don’t wonder if you might get pulled over because of the color of your skin, then maybe the status quo is working just fine for you.

The status quo means driving in fear of a court system that will put you in jail for failure to pay a traffic ticket. Are we as a region really willing to live with that status quo?”

The commission details commonsense reforms to redress the structural inequalities and injustices that are increasingly unsustainable. They begin with reforms in police practices on the use of force and with sentencing reforms.

They expose and condemn the process by which poor towns use traffic tickets as a central source of municipal revenue and then jail the impoverished who can’t afford to pay their tickets, stripping them of jobs and hope in the process.

But the commission understands that the problem goes far beyond police and judicial procedures. It details the inequities in education, and calls for reforms that will begin to give poor children a fairer start. It challenges inequities in school discipline practices.

It addresses economic inequality, calling for ending hunger, extending early childhood health and education, raising the minimum wage, ending predatory lending, increasing affordable housing, developing better and affordable mass transit, and of course for more jobs — all vital to giving the working poor a chance to survive. And it bravely calls for direct efforts to address racial equality, to discuss particularly implicit bias and well as institutional or structural bias that too often stacks the deck against people of color.

The commission members are well aware of the fate of most such reports, which are released, get 15 minutes of press attention and then are lost in the shelves. They know that the state legislature isn’t about to pass costly reforms.

They know that Ferguson can’t solve the problems by itself. But the citizen commissioners argue that it is essential to start trying: “In trying, new coalitions will be built, and a new sense of community will be developed. As the region tries together, people will learn new things from each other, and generate new ideas….”

“The idea of ‘a culture of trying’ is not new to the St. Louis region,” the report asserts. “Our opportunity in this moment is to apply that culture to the uncomfortable realities we’ve set aside for too long.”

Ferguson is not unique. There is a Ferguson in every state. Entrenched poverty, institutionalized racism, unjust police and prosecutorial practices, unequal education and opportunity are a blight in every state.

We have come a long way since the days of segregation, but as the Commission realizes, “we have not moved beyond race.” Police killings of unarmed African Americans have now sparked national demonstrations asserting that “Black Lives Matter.”

The Ferguson Commission has produced a compelling report with clear priorities and sensible steps forward. We know the way forward.

The only question is whether Americans will decide that itis time to move.

Book Review: “I Can’t Make This Up” by Kevin Hart

Raiders Say “Boo to the Flu” During Clorox

OP-ED: Apologies and Sentencing Reform Are Not Enough 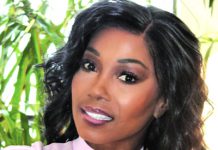 Tampa Bay Rays Beat the A’s with the Long Ball...

School Board Plan to Close Flatland Schools Is a Rerun of...