Power couple, Demetrius “Chi-Raq” Dupree (Nick Cannon) and Lysistrata (Teyonah Parris) have all any young couple could want, fame and power, the kind of power won, maybe even earned through fear.

With money, fame and notoriety, which come from Chi-Raq’s prowess on the bandstand and battlefield, the couple strides fearlessly on Chi-town streets. Spartan nor rival gangsters, Trojans, headed by the one eyed Cyclops (Wesley Snipes), know what defeat looks like until a girl-child is killed.

This senseless death shakes Lysistrata from her perch, her flight setting in motion a series of events Greek playwright Aristophanes couldn’t have imagined nor her lover and other misguided Black men, all infected with a disease which promotes self-destruction and annihilation, rather than self-determination and progress.

Spike Lee’s “Chi-Raq,” with co-writer, Kevin Willmott, rated R, is a discussion those who care about Black lives need to address. Teyonah Parris as Lysistrata and Nick Cannon as Chi-Raq hold the space, an urgent and necessary space for this kind of dialogue. No one is born a killer, killers are man-made. The film opens in Bay Area Theatres, Dec. 4.

In a recent interview in San Francisco with Nick Cannon, he told me he went to a funeral a week earlier for a child killed in the same neighborhood where the film was shot. He talks about such unnecessary violence as misguided manhood rites, rites of passage emptied of crucial and necessary values which come from knowing one’s history.

Demonic. There is no reason that this should ever occur. I understand, we have lost the code. I understand being a warrior, being a soldier, wanting to be that as a man, [but] when you take the code out of that, take the true principles of protection out of that—then what are you?

I hear the young brothers and their music, being killers and savages, beasts. We’re not that. We’re kings and queens, not savages. Our ancestors did way too much for us [come to this].

WS: How does Chi-Raq wrap his mind around ending a war, putting down the gun, and having a conversation with Cyclops, the fierce Trojan leader portrayed by Wesley Snipes?

Nick says, “Wesley is a caricature. I think he purposely did that. He didn’t want to glorify the negativity – what a gang leader could be. He plays him in a comedic way. I actually had to come from the opposite end of the spectrum and stay true to foundation and the dark side of what this life actually can bring and the journey my character Chi-Raq [takes].

“[Chi-Raq] is stubborn, bull headed, egotistical. [He] has this idea of what [he] thinks manhood is, because [he] didn’t have a man in [his] life to show [him] the proper way to be a man. Ultimately, [Chi-Raq] gets to stand up and be held accountable for what [he] character puts himself through, put others through.”

WS: The violence was not something we did to each other, it was something we experienced as a people. We held onto our values as human beings. Dr. Wade Nobles speaks of African personhood often, and notes that when we kill someone that looks like us, it is suicide, because we are killing ourselves.

WS: Right right, so the healing needs to happen.

It was one sister who stood up and started a movement. When you look at the poster, you say, that’s a strong black woman that represents a tale that is over 2000 years. For my daughter to see that poster and say, that’s Lysistrata.

It’s a beautiful thing. It’s how we begin to recondition our minds. It is going to take time but we all want it, we all yearn for it. We want people to focus in on it to demand respect for life.

With long time musical collaborator, Terrence Blanchard, at the helm, here, who knows? There might be a few lessons we can hum on our way from the theater.

For more by Wanda Sabir, go to wandaspicks.com 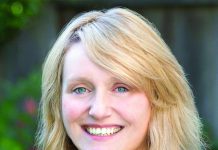