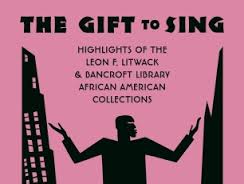 Three days before the opening of the first African-American Museum of History in Washington, D.C., a dedicated group of academics, students, friends and family gathered the Bancroft Library on the UC Berkeley campus to celebrate “The Gift to Sing,” an exhibition open now through Feb. 17.

Professor Emeritus Litwack has been collecting, writing and teaching for decades. When he was a graduate student at Cal, he spent an evening with W.E.B. Dubois, and thereafter committed his career to African-American history.

His earlier work in labor history complemented that decision. Many of his students have departed from a lecture declaring, “I didn’t know that,” as they heard for the first time of the deep history of African American experience in the U.S.

According to Bancroft Library’s curator, David Faulds, “…As I wrote captions (for the pieces in the exhibition), I was also caught up in the history of the lives of the authors…remarkable people.”

Faulds’ arrival at UC Berkeley coincided with Professor Litwack’s permanent gift of over 1,000 pieces, including a copy of “The Autobiography of Malcolm X,” complete with name and address of the original owner – Bobby Seale.

Litwack purchased the book at Moe’s Books, still in business on Telegraph Avenue in Berkeley.

Kim is a Cal Ph.D. candidate. There will be many audio recordings in the permanent collection.

According to the exhibition description, the Litwack Collection” is particularly noteworthy for its Harlem Renaissance first editions in strikingly illustrated dust jackets.”

Also in the exhibition are copies of the of the African-American newspaper, “The Elevator,” founded by Philip Alexander Bell in 1865, is part of this exhibition, which the notes say “was established with the primary purpose of expanding the vote for African Americans.”

Many of the books on display in this exhibition were shown at the Museum of Modern Art in New York in 2015. The image for the exhibition flyer is the cover of a rare 1928 copy of “Home to Harlem,” by Claude McKay and Aaron Douglas.

The current exhibition at Bancroft Library has been in the works since 2014, and the earliest piece is a Phillis Wheatley 1773 collection of poems. Another remarkable book is “The Negro Trail Blazers,” published in 1919 by Delilah L. Beasley the first African American woman to write for a major newspaper, The Oakland Tribune in 1925.

The Gift to Sing: Highlights of the Leon F. Litwack and Bancroft Library African American Collections, Exhibit-Artifacts, is open to the public daily from 10 a.m.-4 p.m., Bancroft Library Gallery, until Feb. 17.

Court Ruling a Blow to “No Coal in Oakland”

Chapel of the Chimes, NAACP Honor Local Heroes on 9/11 Anniversary

Book Review: “The Hippest Trip in America: Soul Train and...