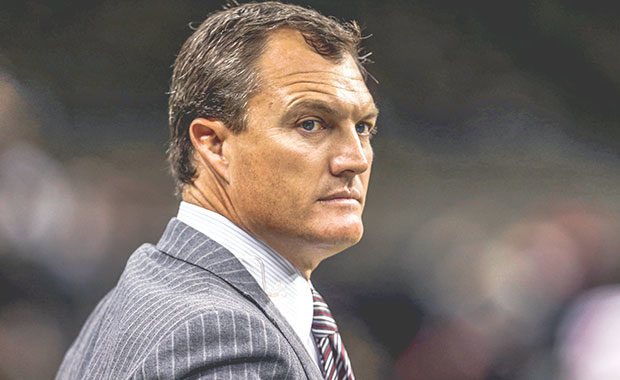 Santa Clara, CA – No experience, no problem. The Forty-niners made a gutsy move by hiring former NFL player, John Lynch as their new General Manager. No one saw this coming after the announcement was made yesterday. Lynch a former 15-year veteran went from player to NFL sports analyst for the past 8 years.

“I just can’t tell you how humbled and excited I am for this unbelievable opportunity,” said Lynch. “I can tell you that two weeks ago I never thought that I’d be doing this.”

It took many by surprise on the decision the 49ers made in selecting Lynch to replace former GM Trent Baalke. So imagine the shock when Lynch explained that this was a two-week process to the media in a conference call today. A conversation with soon-to-be head coach Kyle Shananhan sparked interest of Lynch becoming an NFL executive.

“Our crew broadcasted the Seattle-Atlanta playoff game and somewhere in that week after, [Atlanta Falcons offensive coordinator] Kyle [Shanahan] and I caught up as we often do after a game that I broadcast of his.

We just started a conversation and at some point I indicated to him that, ‘Hey, you know Kyle three or four years ago I had conversations with the Denver Broncos about getting into management.”

For the past two years San Francisco has spiraled into a downward abyss and have yet to figure out how to return to their winning ways. Under head coach Jim Tomsula the team went 5-11 in 2015. Last season, head coach Chip Kelly failed to reach that record and finished the season 2-14 while controversy centered around their quarterback Colin Kaepernick.

In response to my question, “What areas do you want to focus on first to get this team back to where it used to be? Lynch replied.

“That’s a great question.  I think the answer is there’s so much to attack.  I just accepted this job last night.  The most important thing that I can do, I think it’s really important that I articulate the vision that I have for this team to everyone in the building, ‘Here’s who we want to be and here’s the type of people we are looking for if you want to be a part of this thing.’

I think that’s really critical.  And then I would say hand-in-hand with that, first of all we’ve got to evaluate what we have.  I can’t wait.  I can’t get the film in front of me quick enough just to evaluate this roster.  I think you first have to take inventory of what you have to see what we need and that’s with the Draft and free agency.”

Lynch still very new in his position must put together the staff that he’ll be working with and will aggressively pursue people whom he has a good relationship with, that he feels is the best in the business. As a former NFL analyst he has a great football mind but is it good enough to lead the 49ers back to their winning ways.

Book Review: “Ladysitting: My Year with Nana at the End of...

49ers embarrass Raiders in final Battle of the Bay matchup