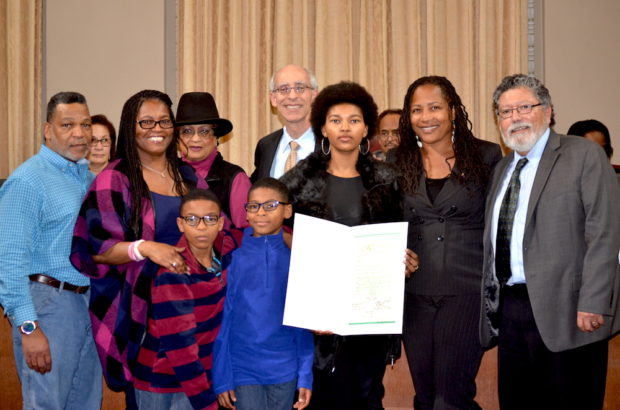 Azariah Cole-Shephard, the 18-year-old Oakland Youth Poet Laureate, was honored by the city this week for artistic contributions to Oakland and for her work advocating for youth.

After the honor was awarded to Cole-Shephard by Councilmembers Lynette Gibson McElhaney and Dan Kalb, the poet recited a piece she had written about the school-to-prison pipeline.

“My main goal is to advocate for youth and to provide a platform for others to articulate their struggles—to help them be empowered,” Cole-Shephard told the Post.

When asked what she thought was one of the biggest issues facing youth in Oakland right now, the poet said it was a lack of quality education in public schools.

“Oftentimes we see students being forced to assimilate to something they can’t really relate to,” she said.

“If you look at staff relationships and who’s being put in these schools, it’s a lot of teachers who are white and from out-of-state who don’t have the comprehensive understanding of their students’ daily experiences.”

Cole-Shephard also mentioned the number of armed security officers and barred windows that make the schools feel more like prisons.

Now, as a student studying electrical engineering, ColeShephard says she plans to continue her advocacy by familiarizing herself with patent law to help introduce kids in Oakland to the STEM program.

The poet and future engineer told the Post that she plans to start her own nonprofit where students can come up with innovative ideas and products that will be protected through patent law.

At this time, Cole-Shephard has the blueprints for the space already made up and is looking for funds to make her nonprofit a reality.

“For me, my poetry and being an engineer is all intertwined because it goes back to advocating for the community,” she said.

“You’ve got to continue that advocacy in everything you do.”

Tulio Ospina is the assistant editor of the Oakland Post and editor-in-chief of El Mundo.

Is Oakland Wasting Money on Bratton?

William Davenport Is Breaking Through

Rainbow Teen Center, a “Hidden Jewel,” was built in 45 days

Hiring Black Census Employees in California Could Avert an Undercount in...