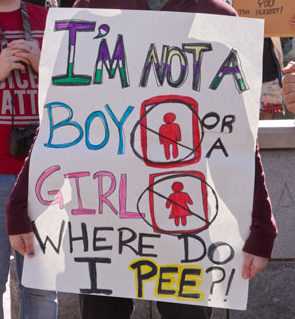 Transgender and gender-fluid teens face up to three times more mental and physical abuse at school and at home than their gender-conforming peers, according to a new study from UC Berkeley.

The study is one of the largest national surveys to date of sexual and gender minority adolescents who have suffered multiple forms of victimization, including child abuse, physical and sexual assault and bullying, raising their risk of depression, post-traumatic stress, self-harm and suicide.

“Our results show that approximately 50 to 70 percent of trans and gender-fluid teens reported being exposed to 10 or more different types of aggression,” said study lead author Paul Sterzing, a UC Berkeley assistant professor of social welfare. “For these young people, victimization is happening in the home. It’s happening at school. It’s happening online. There often isn’t a safe harbor for them.”

The findings were published last week in the online edition of the journal Child Abuse & Neglect, coinciding with the Trump administration’s repeal of federal protections of restroom preferences for transgender students.

The Obama administration last year issued restroom guidelines to safeguard transgender students under Title IX, which bans sex discrimination in schools. The U.S. Supreme Court in March will hear arguments on transgender teen Gavin Grimm’s request to use the boys’ restroom at his Virginia school under Title IX.

For their study, launched in 2015, Sterzing and fellow UC Berkeley researchers collected data from nearly 1,200 sexual and gender minority teens aged 14 to 19 who identify as transgender (male to female, and female to male), gender-fluid (no fixed gender) and cisgender (gays, lesbians, bisexuals and pansexuals whose gender identity matches their assigned birth sex).

Participants, who were given anonymity, were recruited through Facebook advertisements, an online recruitment video and community organizations that serve sexual minorities from across the country.

Among other things, they reported their experiences with more than 40 different forms of violence commonly suffered by adolescents. They also reported their socioeconomic status, mental health issues and family participation in religious activities.

School-based bullying was the most common form of victimization, reported by 69.2 percent of respondents. Transgender girls (male to female) reported the highest rates of cyberbullying while gender-fluid teens who were assigned male at birth were more prone to be victims of sexual violence.

Overall, transgender and gender-fluid youths are at greater risk of experiencing multiple, overlapping forms of violence that occur in the home, school, neighborhood, and online, Sterzing noted. “Boys who don’t conform to their assigned gender role were the most vulnerable subgroup of kids in our study,” he said.

Sterzing is also the author of a forthcoming study that digs even deeper into dozens of environmental factors that make sexual and gender minority youths vulnerable to polyvictimization. The American Foundation for Suicide Prevention reports that 41 percent of transgender people will attempt suicide in their lifetimes, often attributed to high rates of bullying.

“The health outlook for young people who don’t conform to socially prescribed gender roles will remain bleak if we look the other way,” he said. “We as a society have to propose inclusive solutions to protect these vulnerable adolescents.”

That said, Sterzing sees glimmers of hope in the millennial and post-millennial generations whose members are more accepting of gender fluidity.

“Although we have a long way to go, we’re seeing important changes in young people’s attitudes toward sexual and gender minorities that gives me hope we can reduce rates of violence and create more inclusive and affirming spaces for transgender and gender-fluid teens,” Sterzing said.

Moreover, he said, the findings will hopefully motivate politicians, educators and families to show more compassion in the face of what young people who don’t conform to gender expectations are experiencing.

In addition to Sterzing, co-authors of the study are G. Allen Ratliff, Rachel Gartner, Briana McGeough and Kelly Johnson, all of UC Berkeley. The study is funded by a three-year grant from the National Institute of Justice.

Lag in Organ Donors Hampers Understanding of Dementia in Blacks

An Evening with Julian Bond

DAs Becton and O’Malley Win Some Races Still Too Close...