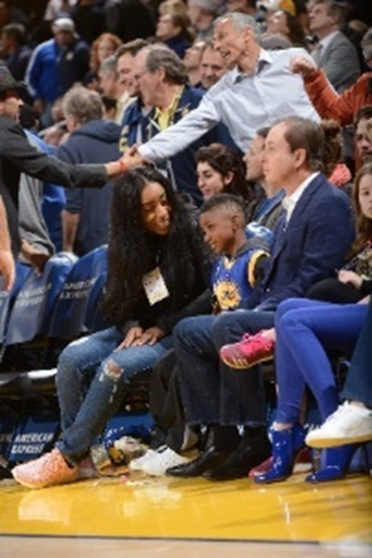 Isaiah, who is six years old, had been begging to watch Curry play since his birthday last summer. His mother told him to work harder in school and improve his reading and writing. He had to keep his room clean, clear his plate from the table “and be a good boy.”

McDonald and her son were left heartbroken at Philips Arena in Atlanta when they were denied access to the Warriors’ game against the Hawks earlier this month because they had purchased counterfeit tickets from a third-party vendor.

When the Warriors organization learned of this, they flew mother and son from Atlanta to San Francisco for Sunday’s game.
At the Oracle Arena Isaiah and his mother were ushered onto the court. He had his hair shaved with a “30” on one side and the Bay Bridge on the other.

One minute Isaiah was watching Warriors guard Stephen Curry swish one basket after the other. The next minute, the basketball great was at Isaiah’s side, his hands on the boy’s shoulders.

Curry asked Isaiah to throw him the ball a few times. One toss went wild.

“It’s OK,” Curry told the boy. “One more try?”
To Isaiah, Curry wasn’t a speck anymore. And neither the boy nor his mother were disappointed. This time, Curry was up close and real.

“It was a pleasure to host Isaiah and his mother, Alexa, at the Warriors game on Sunday,” said Warriors owner Joe Jacob

“We’re so glad we could provide Isaiah with a memorable experience, including meeting the team in the locker room after the game, especially after everything he went through in Atlanta. It’s disappointing to us whenever any of our fans are denied access to games due to fraudulent tickets, and it’s our hope that we can help raise awareness about this and do our part to try and prevent it going forward.”