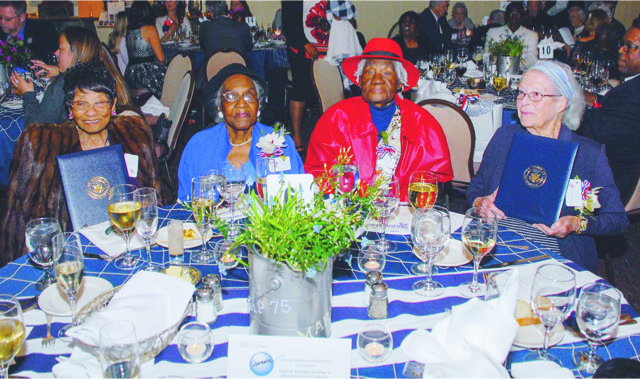 About 100 guest attended the Marinship 75th Anniversary took place on Saturday April 8, at the Spinnaker Restaurant in Sausalito.The Rotary Club dedicated their Gala this year to honor the Marinship 75 celebration and the dedicated men and women that contributed to the victories in WWII.

Annie Lee Small, 97, came to Marin City from Shreveport Louisiana to work as a welder, yet disliked the cold and wet climate in Marin City. Despite the social climate, Small’s says she does not remember any racial tensions in the work place.

“Everyone was just going about their business,” she said.
Gustava Hill Wilson,94, came to Marin City from Baton Rouge, Louisiana at the age of 17 when she heard the announcement about work in the shipyards. Wilson then traveled with her friends on the train to California. She said she wanted to see for herself if California streets were really paved with silver and gold.

Wilson worked as a nurse and cook at the Hospital on Mare Island in Vallejo, and took the ferry and bus to work five days a week
Her brother, Isaac Hill and cousin Robert Valentine also workedin the shipyards.

Mrs. Rodessa Battle, 97, heard the news of employment opportunities at the shipyard, which spread like wildfire to people all over the country. At that time, people would gladly travel 100 miles for a week of work.
She followed her husband, Ledoshia, and his parents to Marin.

“Everybody was thinking about getting the boys back home, and you pretty much had your mind focused on ending the war,” Battle said. “It was kind of like we were all one family working for the same goal. That’s where Marin City got started.”

Beatrice Lino McMurray was born in 1923 on Rough and Ready Island in San Joaquin County. Her family moved to Sausalito when she was two and a half. Lino graduated from Heald’s Business College in 1941 and worked as a secretary for an insurance company. She later worked for a firm procuring war supplies for the U.S. military.

Lino was hired by Marinship in 1942 where she worked as a secretary for the next two years. Her first job was with the Hull Engineering Department located in the former Mold Loft Building. Later she worked in the department overseeing project subcontractors in the Subcontractors Building.

After the war ended Bea held positions with Bethlehem Steel’s office in San Francisco and the Civil Service Commission.

Workshop Encourages Black Millennials to Build Wealth Through Homeownership on...