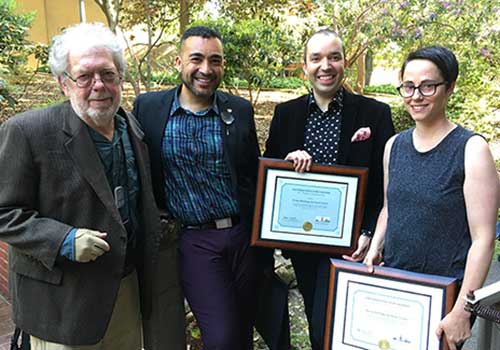 Arturo Cortéz, a doctoral candidate in educational policy at Berkeley and an adjunct professor at UC San Francisco, and Nicola McClung, an assistant professor of learning and instruction at the University of San Francisco, were awarded the 2017 Foundations for Change: Thomas I. Yamashita Prize.

The award of $2,500 honors one or more persons whose work transforms the existing social landscape, and serves as a bridge between the academy and the community.
Cortéz and McClung founded Xóchitl Justice Press, a nonprofit that promotes a just and equitable society through publishing, community partnerships, education and research. In 2014 they launched the XJP Book Project to partner with non-dominant youth to conceptualize, write and produce nonfiction books for beginning readers that are educational and representative of students’ lives.

With the help of USF pre-service teachers, over 50 books, featuring photographs of people and places from the youths’ communities, have been published and shared with emergent readers in San Francisco’s Western Addition and beyond, and many more are in production.

Camila Cribb Fabersunne, a resident in UCSF’s Pediatric Leadership for the Underserved Program whose work seeks to combat the school-to-prison pipeline by applying a public health lens, received honorable mention.

Dylan Bush, a Latin American studies major and pre-med student at Berkeley, and Ankita Joshi, a mechanical engineering major, were awarded the newly established Kids First: David L. Kirp Prize. The annual $2,500 award — endowed by Kirp, a professor in the Graduate School and emeritus professor of public policy — will be given to one or more Berkeley undergraduates engaged in new or ongoing work that demonstrates a commitment, whether in education or other domains, to creating a better future for children and youth.

The award ceremony brought together friends, family, community partners and Berkeley faculty, staff and students, who heard a keynote speech by Pedro Noguera, Distinguished Professor of Education in UCLA’s Graduate School of Education and Information Studies.

A Call to Action: Fight to Help the Homeless Get Off the Streets and Into Housing Now

Brooks’ Victory for Oakland’s New Department of Race and Equity

Opinion: We Have an Exciting Opportunity to Move East Oakland Forward

Rev. Leora Overall, 97, Leaves a Legacy of Evangelism, Teaching and...