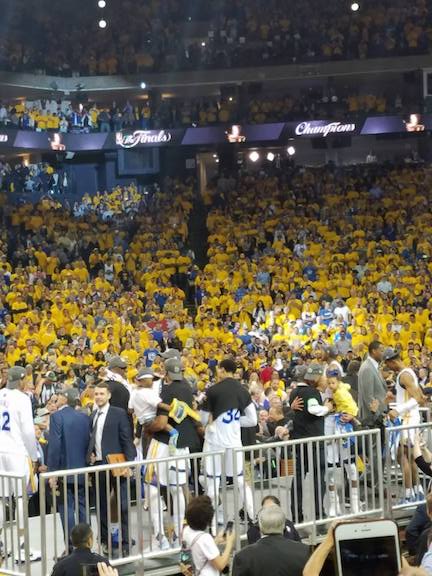 “For us to be able to win in front of our home crowd, is something that I will remember for a long time,” said Warrior guard Steph Curry.

“The whole Bay Area has supported us since I have been a rookie, and to be world champions again, I will enjoy every moment of this.”

The Warriors were the dominant team this year in the NBA for the regular season and this showed in the playoffs.

They swept three straight series against the Portland Trail Blazers, Utah Jazz and San Antonio Spurs. They played with a chip on their shoulders based on how they lost in the 2016 finals to the Cavaliers, after leading the series three games to one.

“We went through basketball hell,” continued Curry. “To be so close, getting the job done and not realizing that goal, and having to think about it for an entire year.”

This motivated the team to strive for greatness this year. It looked as if the team was going to dominate the Cavaliers as well in the NBA Finals, as they jumped out to a three games to zero lead in the best of seven series.

But the Cavaliers battled back to defeat the Warriors 137 to 116 to avoid the sweep in game four. In game five, the Cavaliers jumped out to an early lead, behind the play of Lebron James and Kyrie Irving, as they took an 18-11 lead halfway through the first quarter.

The Cavaliers were able to create Warrior turnovers and convert on baskets by James, Irving and JR Smith.

In the second quarter, the Warriors would go on a 15-0 run on a Draymond Green jumper, a Durant 3 pointer and a put back by Andre Iguodala and led in the game, 71-60.

The Cavaliers went cold behind the tenacious defense of the Warriors, and Irvin’s body seamed frail as he would come out of the game

Things wouldn’t get better in the third quarter, as the Warriors came out with fire, behind shots by Durant and Curry and the improved play of Iguodola, who finished with 20 points in the game.

But the Cavaliers would battle back and they brought the lead down to 90 to 86. Klay Thompson would then hit a 3 pointer, making the score 93 to 86.

When the Cavaliers would look like they were going to get back in the game, the Warriors would make a play to keep the lead distant, as the lead would stretch out to a nine-point Warrior victory.
James finished with 41 points and Irving finished with 26 points.

Durant was voted the MVP of the final. He was presented the trophy by Bill Russell, a former McClymonds High standout and NBA Hall of fame player for the Boston Celtics.

The 6-foot, 10-inch forward joined the Warriors in free agency after being with the Oklahoma Thunder for eight years.  It was a controversial decision at the time, which was met with criticism.

In the series, Durant averaged over 30 points a game, leading the Warriors in scoring.

Bonds Finally Gets His Number Retired

Andre Mouton Is A Model of What the Formerly Incarcerated Can...