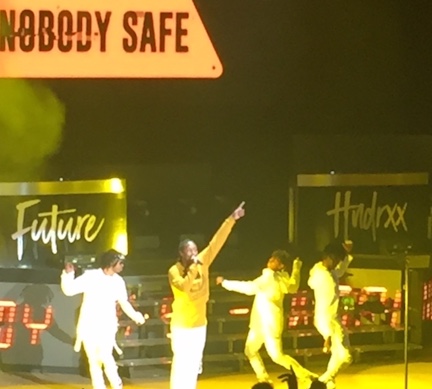 Mountain View, CA – The new generation of hip-hop embarked at the Shoreline Amphitheater last night. Featured on Billboards top charts with his last two albums, Future’s “Nobody’s Safe” Tour was everything fans expected it to be.

Not one empty seat in the house,  Future and his animated DJ Esco provided amazing commentary through each set while hyping the crowd up. Dropping lyric for lyric, Future along with his DJ assembled a fast medley of his first 5 songs.

The rising fashionable, hip-hop star opened his set with his new song “Draco” dressed in black, yellow and white custom drum-line pants, along with a yellow shirt. The  crowd was already amp’d but when the bass kicked in to his hit song “Bugatti” the turn up was insane.

The fans went crazy! In front of a sold out crowd, Future hit moves on beat with his dancers on a few occasions. Doing every hit dance craze shocking the crowd, Future followed with “The Same Damn Time” another hit that got the crowd off their feet, if you can imagine.

After a wardrobe change, Future returned donning all black. Ripped studded black jeans and a black hoodie paired with black mirrored rim glasses. The look was a perfect fit to the dominant performance in which he gave for almost two hours.

With countless number one songs, Future saved the best for last. His breakthrough hits like “Fuck Up Some Commas”, “March Madness” and current number one hit “Mask Off” was part of the finale.  Not quite sure how high one can jump but the fans did their best to imitate the dancers who brought incredible energy to the show.

Future, one of the hardest working artists in the industry dropped six albums between 2015 and 2016.  He accompanied Drake on his Summer Sixteen Tour last year announcing his own tour. Last night he proved his new album, HNDRXX and tour has become one of the most talked about tours of 2017.

Op-Ed: “Silence Is Not an Option”