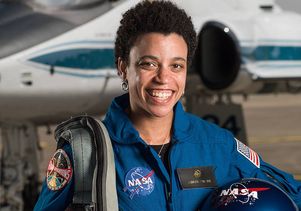 Jessica Watkins, who earned her Ph.D. in geology from UCLA in 2015, has been selected by NASA to join the 2017 astronaut candidate class.

She will report to the Johnson Space Center in Houston for duty this August.

Watkins, 29, has loved space and science since she was 9. “Today is simultaneously the culmination and beginning of a dream,” she said.

Watkins earned her bachelor’s degree in geological and environmental sciences at Stanford University and has worked at NASA’s Ames Research Center and NASA’s Jet Propulsion Laboratory.

For the past two years, she has worked at the California Institute of Technology on the Mars Science Laboratory mission’s Curiosity rover, participating in daily planning of rover activities and investigating the geologic history of Mars’ Gale crater.

For her Ph.D. research, she studied the “emplacement mechanisms of large landslides on Mars and Earth” through orbital data analysis and field research. Her UCLA adviser was An Yin, a professor in the UCLA Department of Earth, Planetary, and Space Sciences.

While at UCLA, Watkins was a teaching assistant and won the UCLA Chancellor’s Prize and her academic department’s Harold and Mayla Sullwold Scholarship for Academic Excellence and Outstanding Original Research.

She is “super grateful,” she acknowledged, for all the opportunities she has received, including at UCLA; she thanked and praised professor Yin for his support of her goal and his mentorship.

During graduate studies at UCLA from 2010 to 2015, she went on field research trips to the Grand Canyon, Yosemite and national parks in Utah to study the Earth’s geology, she recalled fondly. In her graduate research at UCLA, Watkins analyzed data and high-resolution images from NASA’s Mars Reconnaissance Orbiter to study landslides on Mars and piece together the planet’s geology.

Her many awards and honors include a National Science Foundation Graduate Research Fellowship in Geosciences and Stanford University Dean’s Award for Academic Excellence. At Stanford, she was a member of the women’s rugby team, as well as the USA Rugby Women’s Sevens National Team.

Watkins will begin two years of training as an astronaut candidate. Upon completion, she will be assigned technical duties in the Astronaut Office while she waits for a flight assignment.

After she completes her training, Watkins said she would “be happy to be assigned to any space mission.”

Opinion: Kaplan Should Run for Mayor of Oakland

Rebecca Kaplan Could Be Removed from Regional Air Quality Board; Oakland...

OP-ED: Returning to San Quentin A Year After Being Released

Black Repertory Theatre Presents “A Shadow in the Clouds – The...