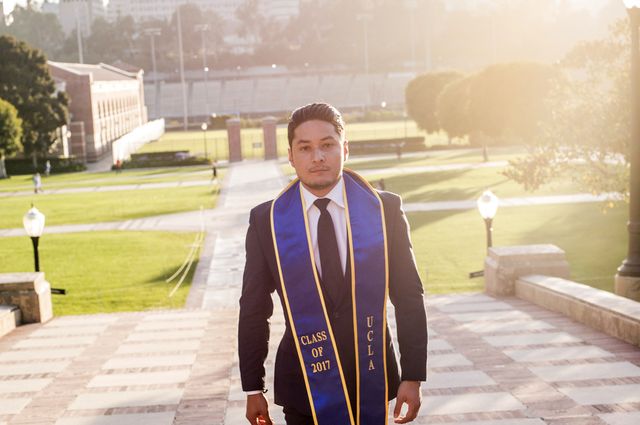 When UCLA political science graduate James Anderson crosses the commencement stage this year, like his fellow members of the class of 2017, he’ll do it proudly, with his eye on the future.

The Los Angeles native will also carry with him a powerful record of service to his community and to hundreds upon hundreds of people across California and the country. He’ll carry the memory of meeting Barack Obama in the White House, telling the then-president his plans to go to UCLA, the only school he ever dreamed about attending.

Anderson will also carry his past. This month not only marks the culmination of his college dream, but also commemorates the five-year anniversary of his release from prison.

And deep down he’ll also carry his future political aspirations.

“I’m focused on changing narratives,” Anderson said. “For myself, and for others. I’ve been through so much, there’s nothing that’s going to make me fail or fall, and if I do, I’m going to get right back up.”

Anderson’s upbringing in the Santa Clarita Valley was defined by poverty, physical abuse, trauma, gang violence and drug use. He was in and out of jail before a conviction on an assault with a deadly weapon charge when he was 17 left him sentenced to seven years in the California Youth Authority. Anderson ultimately spent three years in state prison.

Somehow, the 24-year-old has alchemized those experiences into a boundless sense of joy and compassion, punctuated by a purpose-driven charisma and seemingly unending supply of energy and love.

“I had the same passion when I was in a gang,” said Anderson, who majored in political science and international relations. “I tell people now, ‘You want to be a gangster? You don’t have to lose that passion, just point it toward something that’s good.’”

Anderson made the commitment to change his life while still behind bars, and upon exiting prison, immediately set out to work to change the lives of others. He is the co-founder of the Los Angeles based Anti-Recidivism Coalition, created by Hollywood producer and noted criminal justice reform activist Scott Budnick, who became Anderson’s friend and mentor.

The group, founded in 2013, has 450 members, all formerly incarcerated men and women who have committed to reshaping their lives. By joining, members pledge to be gang free, crime free, drug free, working or seeking employment or in school and willing to be of service to their community. The coalition provides resources, mentorship, even housing.

How Nancy Green, ‘The Pancake Queen’ Became the Face of Self-Rising Flour

OP-ED: Police Reform Now: The State of Emergency in our Precincts

Op-Ed: Where is the Economic Fairness to Oaklanders?