The Oakland City Council this week once again postponed approval of the Public Bank of Oakland Feasibility Study, despite the testimony of many supporters and a demonstration outside City Hall of dozens of paper bills hanging from the iconic Coastal Live Oak tree, symbolizing the fact that the Public Bank will “make money grow on this tree.”

The original resolution was passed last November, seven months ago. It’s now on the agenda for the July 18 meeting, postponed for another month.

It is fiscally irresponsible to keep postponing what will be a huge benefit to the city.

The good news is they had to bring in the big guns to oppose the bank, bringing in City Administrator Sabrina Landreth to present the staff report opposing moving ahead with the feasibility study. Landreth is the highest-ranking staff person in the City. 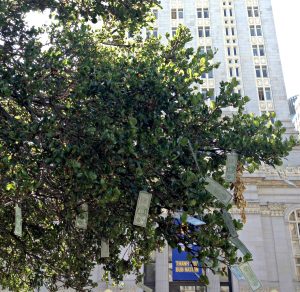 That’s a compliment to the determination and unity of the bank’s supporters.

The excuse this time was that they want those who will benefit from the bank to pony up some of the cost of the study. That sounds reasonable until you realize that they want money from cities a quarter the size of Oakland and from the cannabis industry.

At this point, it feels as though we’re trapped in some horrible fairy tale where the evil king promises the young hero his daughter’s hand in marriage, if he just kills the fire-breathing dragon.

And when the hero obediently brings the dragon’s head to the king, he laughs and says, “And now you have to clear all my fields of rats, and then you can marry my daughter.”

Oakland can afford to spend $100,000 for this study. In fact, the city can’t afford not to spend it.

Based on the experience of the highly successful public bank of North Dakota, we are losing as much as $186,000 every day that we don’t have a bank.

That means Oakland will lose $5 million between now and the next hearing because of the City Council’s failure of nerve. This is fiscal irresponsibility.

Op-Ed: The Continuing Fight for The Right to Vote

OP-ED: The Gig is Up and Change is a Must, Unavoidable