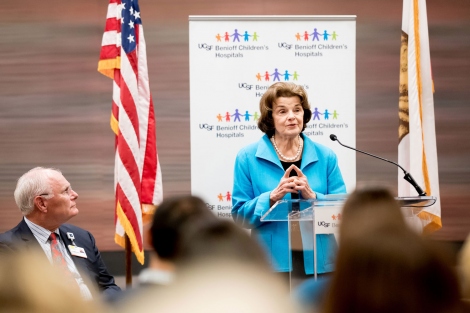 Sen. Dianne Feinstein toured UCSF Benioff Children’s Hospital San Francisco on Friday, July 7, highlighting the importance of safeguarding Medicaid for the health of children and families across the nation.

At a press conference following the tour, Feinstein spoke about the dangers of the proposed Senate bill that includes nearly $800 billion in cuts to Medicaid, which expanded under the Affordable Care Act (ACA) and would take away health care coverage for 22 million Americans by 2026.

UCSF Health cares for more hospital patients covered by Medi-Cal – California’s Medicaid program – than any other hospital in San Francisco.

In addition, UCSF Health pays the uncompensated costs for hospital and physician services that are not covered by Medi-Cal, a number that totaled $289 million in 2016.

Academic medical centers like UCSF Health not only provide care, but also train the next generation of clinicians and support biomedical research that is essential to advancing new treatments.

“We are proud and honored to serve those patients and their families, but the threat to the financial underpinnings of the Medicaid program is indeed serious and a crisis for the country,” said UCSF Chancellor Sam Hawgood, MBBS. “Any further erosion to this program federally would put intense pressure on our ability to provide these services.”

Feinstein said the proposed Senate bill “breaks the back of Medicaid over time,” cutting $772 billion from the program over 10 years. The bill, she said, was written by 13 white men sitting in a back room, seen by no one else in either party, and without input from physicians or groups who would affected by the proposed cuts.

Feinstein visited UCSF’s Intensive Care Nursery and met with three mothers of children who have depended on supplemental Medi-Cal to cover vital services not covered by private insurance.

Bay Area Parade and Festival for Cesar Chavez on April 18

‘Restorative Justice’ Strategy to be Used in Marin City

Racial Disparities in End-of-life Care; Many Are Unaware of Hospice...