Hayward, CA – The Web.com Tour kicked off today and the crowd of spectators made sure to get a good glimpse of Stephen Curry in his first attempt to compete with the pros. He didn’t get off to a great start when his first hit off the tee landed in the cup holder of a golf cart driven by a volunteer.

“That’s probably a first on the tour. There was a golf cart just left of my target on hole No. 1 and it went right in the cup holder,” Curry said. “Not an ideal way to start with calling a rules official over after your first tee shot. I kind of settled in after that.”

Settling in took some time as Curry found himself spending some time at the beach as his ball dropped into a few bunkers. But it wasn’t long before the two-champion found his stroke. Curry sunk his first birdie on the 15th fairway on the green. 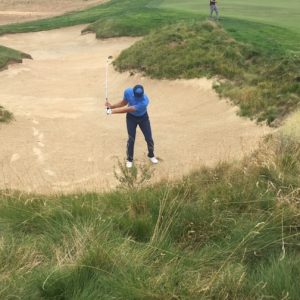 That play setup two more birdies but by days end, he tied for 142nd out of 156 players. Nonetheless, Curry faired well among the pros. Despite a few mistakes along the way, he finished 4-over 74 with a bogey on the last hole.

“If you told me I was going to shoot 74 going into the first round, I’d take that all day every day, so I’m pretty happy with it,” he explained. “Obviously, as a competitor, you feel like you can always play better, so hopefully I can do that tomorrow.”

Tomorrow Curry must score low in order to make the cut for this upcoming weekend play. To the pros his chances look slim but to the two-time MVP, it’s an opportunity to get better. While his day job consists of playing along side the world’s top NBA players, Curry finds solace on the golf course and can quite possibly make this his next sport to dominate in time.

“It was an amazing experience, I’ve been looking forward to this since I found out, and to finally hit my first shot in tournament play was a really, really nervous moment, but it was everything I hoped for,” said Curry.

“I want to play better tomorrow. Now that I kind of got the jitters out hopefully that will happen and hit a couple more good shots and make a couple more putts.”

Families and Teachers Shut Down School Board Meeting to Oppose...

Pastor Kevin Hall Offers “Lesson to Live By” in Richmond