Oakland, CA – The Kendrick Lamar Tour stopped through Oakland last night but before he took the stage, his merchandise was a huge success in San Francisco. Hundreds of fans stood in line for the one day pop-up shop that carried hats, t-shirts and jackets that donned PRAY FOR ME in red and white.

Located in the heart of Chinatown, exclusive merchandise was sold until supplies lasted. While Lamar’s merchandise is also sold at concerts, the pop-up shop had more exclusive items that were sold at a lesser price if you were lucky enough to know the location.

Nonetheless Lamar’s The DAMN. Tour kicked off in front of a sellout crowd at Oracle Arena and didn’t disappoint.  His highly acclaimed album, DAMN has been the number one album for three months since its debut.  Lamar began the set with “DNA” a favorite of many including me. 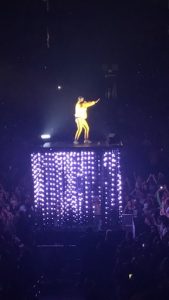 The crowd chanted almost every lyric and along with Lamar “I got power, poison, pain and joy inside my DNA, I got hustle though, ambition, flow, inside my DNA.

Lamar’s fourth album, DAMN is a masterpiece. The poetry in which he speaks is inspiring to many.  Through his music he advocates becoming closer with God and encourages you to dig deeper through his music coming face-to-face with unjust policies, unjust media portrayal and a government falling apart.

The remaining songs performed were from his double-platinum album DAMN. “LUST,” “LOYALTY,” “PRIDE,” and “m.A.A.d. City”.  The crowd went into a frenzy when Lamar began to rap an all-time favorite, “B***, Don’t Kill My Vibe”.  By this point the sellout crowd was on their feet lightening up Oracle for one of the best shows of the year.

After a 2 hour performance, Lamar took it all in and appeared on stage in a brief moment of silence before the bass dropped for his current hit song, “HUMBLE”. His fans wasted no time belting out the chorus a capella while Lamar listened intently moving head in a up and down motion like a proud parent.

After that, Lamar captivated the crowd with a high-energy rendition of “HUMBLE”.  Afterwards, he thanked the crowd and exited the stage but Oracle wasn’t ready to go home.  The fans still standing on their feet wanted more so Lamar returned for his final song which was “God” off the DAMN album. Kendrick Lamar’ The DAMN. Tour was one of the best performances I’ve seen this year and is a must see for all.

Disproportionate Numbers of Blacks and Latinos Lose Driver’s Licenses Because Of...

Rebecca Kaplan: “For Such a Time as This”