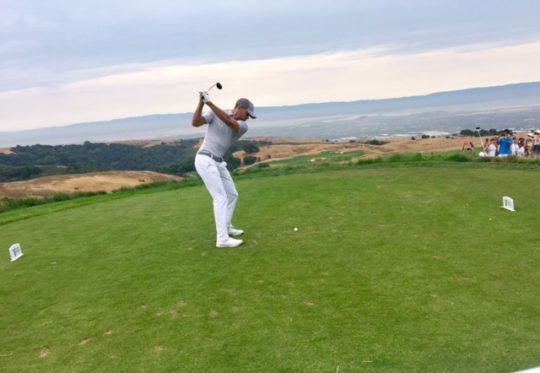 Hayward, CA – Entering the Web.com Tour was a brilliant idea. After coming off a dramatic comeback in the American Century Celebrity Golf Championship. Stephen Curry has jumped to playing along the best in the golf. While his chances were slim in Ellie Mae’s Classic Web.com Tour, he impressed us all.

Curry didn’t play the best game of his life as he predicted prior to the tournament’s start. But he did play his best each day. Curry missed the cut by 11 strokes on Friday making him unable to compete over the weekend. Yet he finished with 74-74 for two consecutive days, totaling 148. For an amateur, that’s not bad.

“It was an unbelievable experience, and to shoot two 74s, I’ll take that,” said Curry.

“When you don’t really know what to expect going in, it’s hard to set expectations.” 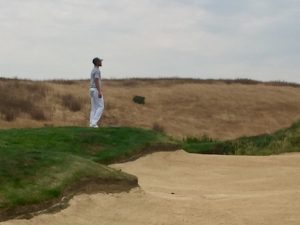 The two-time MVP has taken it all in stride. Curry is considered the best at his craft, yet he’s looking to add perfection in another area, golf. A pastime that he’s enjoyed since high school has become an ambition for the future. Curry might not have the time to put in now but whose to say,  in a few years we won’t see him back on the golf course competing for a chance to make the PGA Tour.

“I’ll stay in my lane and enjoy,” Curry said when asked if he’ll retire to enjoy another sport like Michael Jordan. “I’ll be suiting up for the Warriors next year.”

In his first pro golf debut Curry received some high praise from top golfers. His impressive following brought the Web.com tour the most spectators in its history. More people probably watched golf for the first time just to get a glimpse at Curry’s swing. After four bogeys and no birdies on Friday, Curry settled in and hit four straight pars before his first birdie on the 14th and 17th holes.

Curry presents more skill and talent on the golf course than any other current or former NBA player, including Jordan. He definitely has the tenacity to compete again and possibly enter a better tournament on any Tour. Curry should continue his career in golf in the future and I’m certain the encouragement from the golf world would boost his ego.

Best of luck to @StephenCurry30 this week in the @elliemaeclassic. Thanks for enjoying our game as much as Barbara and I enjoy yours! 🏀🏌️

Alan Shipnuck, senior writer, Sports Illustrated
“It was great stuff, ruined only by the PGA’sTour’s myopia – how on earth did they not have any live coverage? What Steph did was so much fun and I hope he tries again next year.”

“That was awesome what he did yesterday,” Jordan Spieth said from the Bridgestone Invitational (via AP). “I think he certainly beat most everybody’s expectations, but I don’t think that really surprised him.”

“All day yesterday I was checking who said what, and I don’t usually do that, but it was cool to hear the chatter that was going on,” said Curry. “A lot of guys texted me that I know on the PGA Tour, some guys on the Champions Tour reaching out, congratulating me on a solid round. Then it got into the social media stuff, but a lot of people had their foot in their mouth.

So that was cool, to set a little fire in that regard. … “I love to play golf, but I don’t live in the golf world, so that’s cool.”

Many Coyote Sightings in Regional Parks

‘Medicare-For-All’ Gets Buzzy In Unexpected Locales

Free Workshop for Those Coping with Mental Illness and/or Substance Abuse...

Teach-in Oct. 30 on Voting and Housing Insecurity at Laney College

As Ramadan Winds Down, Muslims Look Forward to Eid