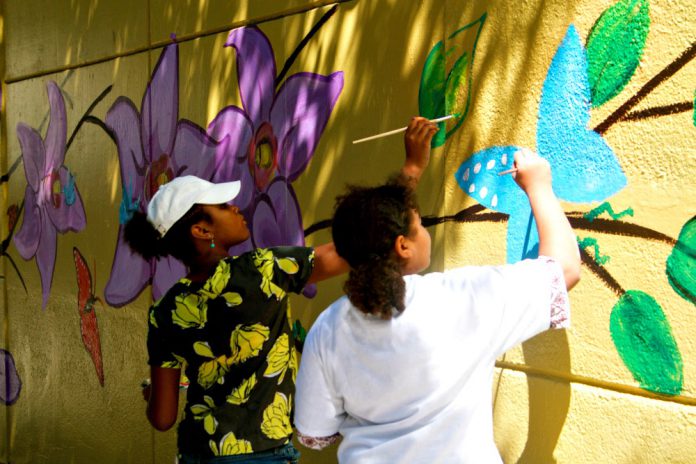 Children paint in the colors for butterflies at the Youth festival. Photo by Tobaji Stewart

The brainchild of gallery owner Joyce Gordon, who brought together a team of Oakland artists and community activists who work with youth, the corner was alive with creativity.

The parking garage walls got a facelift from The Black Mail Collective, a group of creative people and thinkers including muralists, with painting assistance from children and adults. By day’s end, the images of a fish in motion and butterflies adorned the walls.

Closing off the block at Webster street was a basketball ‘court’ improvised with chalk boundary lines and a standalone hoop that drew players in pairs and small groups, taking breaks from art efforts.

A wing of the festival was devoted to young artists selling their own works. Alan Clark wrote and illustrated a book in graphic form telling the story of the enslavement of African people. Glass worker Alexza Gipson showed her crafty side with embellished frames, and photographer Salihah Saadiq tweaked the idea of ‘People of Color’ in a series of portraits of black and brown young people modeling monochrome outfits in rainbow shades.

The young entrepreneurs frequently nodded their heads, acknowledging the Spoken Word artists who dominated the stage, while attendees danced to the beats.

Besides Spoken Word, the stage thrived with Edna Brewer Middle School’s ‘The Void,” a quartet of 12- and 13-year-olds who performed ‘Footsteps’ and ‘A Song for My Father,’ unassisted by their teacher. The Oakland Interfaith Youth Gospel Choir also performed.

Gordon credited the festival’s success to team work through partners like the Oakland School for the Arts and sponsor/neighbors Greenlining Institute, Akonadi Foundation and Geoffrey’s Inner Circle. Also in attendance was festival supporter Councilwoman Desley Brooks of Oakland’s District 6.