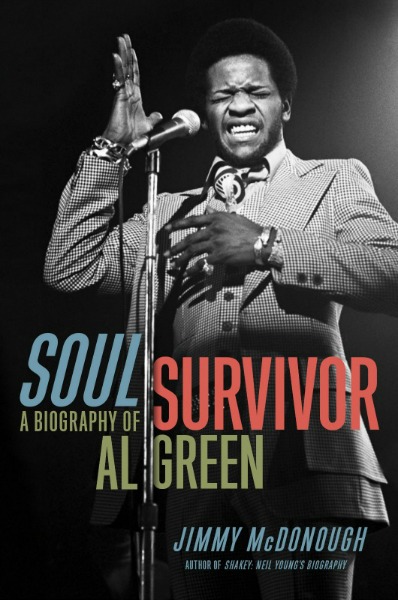 Difficult.
We all know someone like that, who could charitably be called a challenge. Someone who swims against the current, who rubs people the wrong way, who makes you growly. In the new book “Soul Survivor: A Biography of Al Green” by Jimmy McDonough, ruffled feathers can come from surprising places.
Born to sharecroppers, Albert Leorns Greene (he later dropped the “e’”) entered the world in April, 1946, on the floor of a two-bedroom house near a town so small it barely registered on a map. Greene’s family was church-going and always had food on the table but life was hard, and young Greene’s father often didn’t have but a few hundred dollars to last a year. Some people said he had a temper.
“Those who know Al,” says McDonough,” described him much the same way.”
Even so, the family was close and singing was an important part of their lives. When Albert was still a child, his father assembled a gospel group with his sons, leaving Albert out of the mix. McDonough says that Al “watched with envy” as his brothers performed, and vowed that he would become famous one day.
He was a “different” child, a “sensitive” one, but determined: all he ever wanted to do was sing and if he had to, he’d do it “on my own without anyone.” Despite his set mind, Al was shy, and didn’t make friends easily; a family move north didn’t help.
After a successful second try at high school. Al Green scrabbled to find fame in Michigan and in New York before heading for Memphis , a recording hotspot. He wrote songs and had a few minor hits, although McDonough says he was “an… idiosyncratic songwriter” and had a “strange relationship” with the guys in his band. Still, what he had, “odd” as it was, worked: by 1972, he’d finally achieved his fame.
Today, the Reverend Al Green has returned to his roots, at his own church. He’s supposedly reticent to talk about parts of his past, or about the women who came to him in lusty waves. He’s, in fact, sometimes said to be reluctant to talk about much at all; he even turned author Jimmy McDonough away. McDonough was able to interview some of Green’s friends and family – or he tried to – and what he learned, plus what he gleaned from elsewhere, is the basis of “Soul Survivor.”
Here, McDonough offers a level of respect and praises Green’s musical genius, even as he interjects second-hand anecdotes of Green’s quirks and conflicting stories. He says Green is “the crazy-old-coot uncle” who’s perpetually unpredictable, which underscores a biography that’s interesting but shockingly less-than-complimentary. McDonough says he’d been thinking of writing this book “for over twenty years” but, based on narrative here, readers may rightly wonder why.
With the feel of side-whispered gossip in a dark alley, scandal fans may enjoy this book but, for others, it might be a harder sell. “Soul Survivor” is good enough, but wanting it on your bookshelf may be a decision that’s difficult.

“Soul Survivor: A Biography of Al Green” by Jimmy McDonough

COMMENTARY: Facts Rarely Discussed About Blacks and the Democratic Party.

Oaklanders Could be Left Holding the Bag for Tagami’s Army Base...

Glen Upshaw Wins “In the Name of Love” Humanitarian Award for...