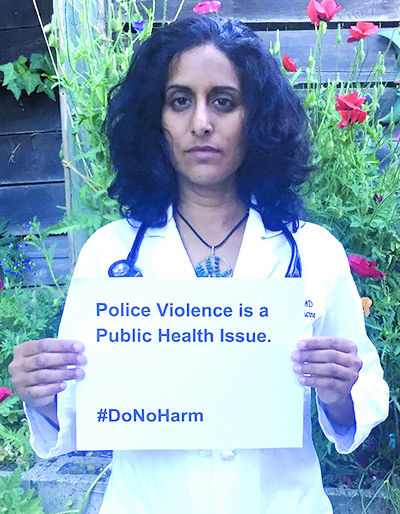 Rupa Marya, M.D., a UCSF professor and co-founder of the #DoNoHarm Coalition, believes police violence must be addressed as a public health crisis.
Grassroots efforts around the Bay Area are growing as local organizations find that governmental efforts to address social problems are taking too long or are ineffective. Hunger, homelessness, systemic racism, police violence and more, are taking a toll on public health across the country, and people decide they are going to  “do something.”
In the 1990s, the Clinton “welfare reform” encouraged local communities to form non-profits to apply for state and federal grants to develop their own programs to address problems in their communities. The net effect was not sufficient to help those in need.
But now, there appears to be a resurgence of this spirit of “we’re going to do what we can to make a difference.”
Here are several examples of local initiatives:
The First Presbyterian Church of Oakland has had a meal program for a number of years and is now considering expanding that ministry to meet the broader needs of their service community.
According to the team leader of the food ministry, Bill Coburn, “We see the same people over and over and get acquainted with them. We want to help them navigate to places to meet all their needs, not just serving them two times a week.”
Pastor Deborah Avery of First Presbyterian heads a discussion group working on the possibility of forming a non-profit to expand the Food Ministry efforts.
Another effective community effort is centered in San Francisco with the #DoNoHarm Coalition.
#DoNoHarm publicly and effectively addressed San Francisco Police Department violence, leading to the termination of Police Chief Greg Suhr. Medical staff associated with the coalition wheeled hunger strikers from the Mission District to City Hall, and the public image of that was compelling.
UCSF professor Rupa Marya, M.D., worked with the coalition, and by invitation, she assisted at Standing Rock with medical aid during the pipeline stand-off.
She believes that many of the current social justice problems are really public health crises. The coalition is already doing research on the health effects of evictions.
“We are also in the preliminary stages of developing a nationwide survey of experiences people have when justice is not being served,” she said.
Addressing homelessness head-on in its public ministries cohort, Allen Temple Baptist Church recently pressured city and county elected officials to remove homeless encampments around the church at 85th Avenue and International Boulevard in East Oakland.
But they were removed “compassionately,” with counselors present and none of the “sweep” activity, which has caused trauma to so many.
For more information, go to:  www.donoharm.org.

A’s Back Lester In Win Over Royals

Coalition Calls on President Obama to Ban the Box