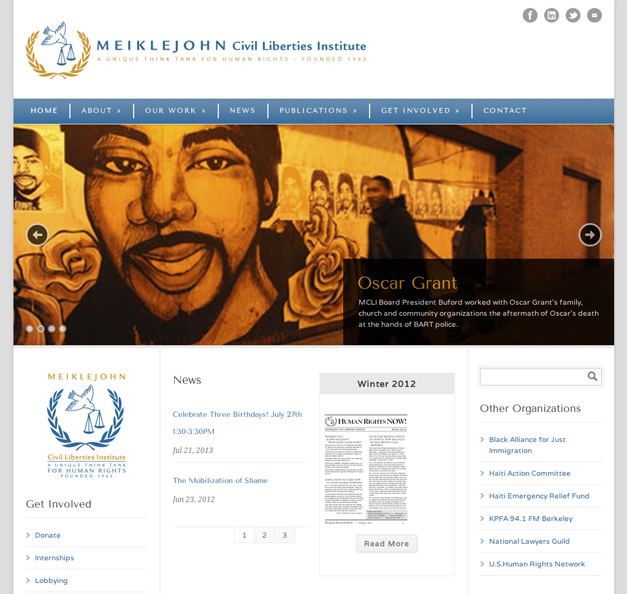 The Meiklehohn Civil Liberties Institute (MCLI) is hosting a Human Rights Forum to work with community organizations and individuals directly affected by racism at the hands of public officials.
The forum will be held Monday, Oct.16 at 6:30 p.m. at the Omni Commons, 4799 Shattuck Ave. in Oakland. Based on the forum, reports will be submitted to the United Nations on Racism and Human Rights Violations in the United States.
“We encourage everyone who wants to work on this project or include your knowledge or experience to attend, Steven DeCaprio, Development Director of MCLI.

“We are currently facing a political climate of increased human rights violations and racism in the U.S. The unjust and senseless decision of Judge Timothy Wilson acquitting police officer Jason Stockley of the murder of Anthony Lamar Smith in St. Louis serves as just one of many examples of racist oppression that is increasing under the Trump administration,” said Walter Riley, president of the institute’s board.

“In order to mobilize with diverse communities facing racism at the hands of local, state, and federal governments, we are reaching out to social justice organizations and community members to work together to report these human rights violations to the United Nations by Nov. 15,” he added.
MCLI is working to facilitate the submission of “shadow reports” to the UN Committee on the Elimination of Racial Discrimination. Shadow reports are reports submitted by NGOs to the U.N. outside of the reporting process by nation states. Shadow reports serve as a tool to raise awareness about human rights violations and to hold public officials accountable.
Founded in 1965, the institute is part of the peace and justice community, protecting and expanding human rights. MCLI is a center for peace law, an organizer for the right to education, an information clearinghouse on social change, an advocate of government accountability, a training center, and repository of history.
Making reports works, according to the institute.  “As the late Justice Frank Newman often said, the most effective method of enforcing human rights standards is the mobilization of shame, which worked in South Africa and later in East Timor,” said Ann Fagan Ginger, executive director of MCLI. “More recently, MCLI submitted a report after Hurricane Katrina to the U.N., adding to public pressure that eventually led to the convictions of the police responsible for the Danziger Bridge shootings.”
The U.S. ratified the International Convention on the Elimination of All Forms of Racial Discrimination (ICERD) and is required by Article 55 of the Charter of the United Nations to respect human rights.

Op-Ed: The Continuing Fight for The Right to Vote