Santa Clara, CA – It took ten weeks for the 49ers to finally win their first game of the season. Heading into the Bye week, they can look back at their tumultuous start to the first half and say its now in the past. Loud cheers, chants, hugs and handshakes is how the 49ers will greet the second half of the season, a new start.

The 49ers removed the monkey off their back with a 31-21 victory over the New York Giants. A phenomenal performance by rookie C.J. Beathard who went 19 of 25 for 288 yards with two touchdowns and one interception. After the brutal beating he got last week, Beathard played his best game of the season.

“I’m on cloud nine right now,” said TE Garrett Celek. “This is awesome. We’re all going to celebrate and enjoy this win. It’s good to have it before a Bye week so we have two weeks to enjoy the ‘W.’”

The second half was pure domination for the 49ers who faced a team that’s worse than them. A lack lustered Giants team didn’t look like they could beat a high school team today. Both the offense and defense fell apart, Eli Manning completed 28 of 37 for 273 yards with two touchdowns and a fumble.

The 49ers offense didn’t get off to a great start but that soon changed. Carlos Hyde rushed for 28 yards on opening drive, a late hit on the running back gave them 5 extra yards. But the 49ers failed to get back in the red zone and settled for a 43-yard field goal which gave them their first lead since October 1st.

The Giants however, matched them for every score, Aldrick Rosas tied the game 3-3 with a 47-yard field goal on the next series. Then followed with another 42-yard field goal to give New York a 6-3 lead to end the first quarter. But that changed quickly when the 49ers got “hot” in the second quarter.

Beathard became the first rookie QB in franchise history to complete two touchdowns of 45-or-more yards in a single game. He’s also set the rookie franchise record for most passes attempted by a rookie QB, passing QB Tom Owen (184 watts. in 1974). Beathard went deep to Marquise Goodwin for an 83-yard touchdown making it a 10-6 game.

“They did a great job today protecting me,” Beathard said. “I feel like I barely got hit, barely even got touched.”

Goodwin’s 83-yard reception was the longest pass play since QB Colin Kaepernick to WR Brandon Lloyd for an 83-yard touchdown on October 13, 2014. That was also Beathard’s longest touchdown pass of his career. An impressive day for the rookie QB who connected with Garret Celek for a 47-yard touchdown pass right before the half ended extending their lead 17-13.

Manning made it interesting in the second when he found Evan Engram for a 9-yard touchdown. That would the last time he threw a touchdown until late in the fourth. The Giants opportunity to take the lead behind an amazing one-handed catch by Sterling Shepard.

Manning’s 18 yard pass to Shepard put them in the red zone but the 49ers defense made the necessary stops when needed and forced Rosas to kick a 34-yard field goal that went wide right.  The field goal was no good.

“Well it’s tough losing,” said Manning. “You work hard every week to go out there and execute well to make plays to put your team in a situation to win and it’s not happening. Doing some good things, in the first half I thought we came out well and moved the ball well and the second half just didn’t execute well enough.”

The game had its fair share of bloops and blunders including a tipped pass intended for Matt Breida that landed in the hands of Olivier Vernon. But Beathard and the offense bounced back when he rushed for an 11-yard touchdown. Followed by Breida’s 33-yard touchdown.

The 49ers finished the day rushing 33 times for a season-high 186 yards. That’s the most yards rushed by this team since December 11, 2016 vs the New York Jets. The 49ers also punted only once today which is the first time the team had 1-or-fewer punts in a game since September 14, 2014 vs Chicago.

“I didn’t know it’d take this long, but it was special with the guys,” head coach Kyle Shanahan said. “I was real happy for them. Those guys have been working so hard and we just keep coming in every Monday so disappointed. By the time I see them every Wednesday, it’s like the first game of the year. To have them still out there going like that with how many we’ve lost in a row, that’s what gave us a chance to win today.”

Giants Fall To Cardinals, Even Series 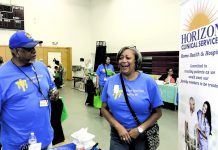 49ers season ends with a loss to the Seahawks