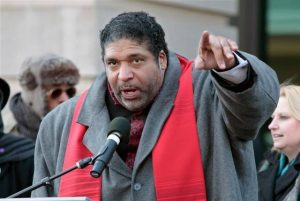 While discussing the critical state of the country, he cited the damage caused by Donald Trump and the current administration. He also explained how the country’s leadership has used divide and conquer tactics throughout the nation’s birth. He called on audience members to reverse this moral crisis in the United States by working together to end voter suppression, re-districting, and all the areas impacted by systemic racism.

“We are living in an age of moral crisis,” he said. “What are we going to do about it?”

Bishop Barber is the President and Senior Lecturer of Repairers of the Breach Co-Chair of the Poor People’s Campaign, A National Call for Moral Revival. The pastor of Greenleaf Christian Church Disciples of Christ in Goldsboro North Carolina has also penned several books including, “Revive Us Again: Vision and Action In Moral Organizing; The Third Reconstruction; Moral Mondays, Fusion Politics and The Rise of a New Justice Movement.

Barber has turned his words into action by creating the Forward Together Moral Movement that has gained national recognition with its Moral Monday protests at the state legislature in North Carolina. This year, he led a historical number of protesters at state capital to embrace a moral public policy agenda. Barber, a national NAACP board member, also encouraged audience members to join the NAACP and the movement. Currently he is a Visiting Professor of Public Theology and Activism at Union Theological Seminary in New York City.

“Being honored by the NAACP is such an honor because the organization has paved the foundation for many of the freedoms we enjoy today” said Hickman.

The Historical Legacy Award acknowledged the San Francisco State Black Student Union of 1968 to 1969 for their 5-month “Strike Out,” protesting racism and demanding an increase in minority student enrollment. As a result of the striker’s efforts, the Departments of Black Studies and Ethnic Studies were founded at San Francisco State University.

SFNAACP President, Rev. Dr. Amos Brown, Sr. also called on a State of Emergency for African American students in the San Francisco Unified School District. Contact the SFNAACP for more information on the crisis and how you can help, visit: www.sfnaacp.org