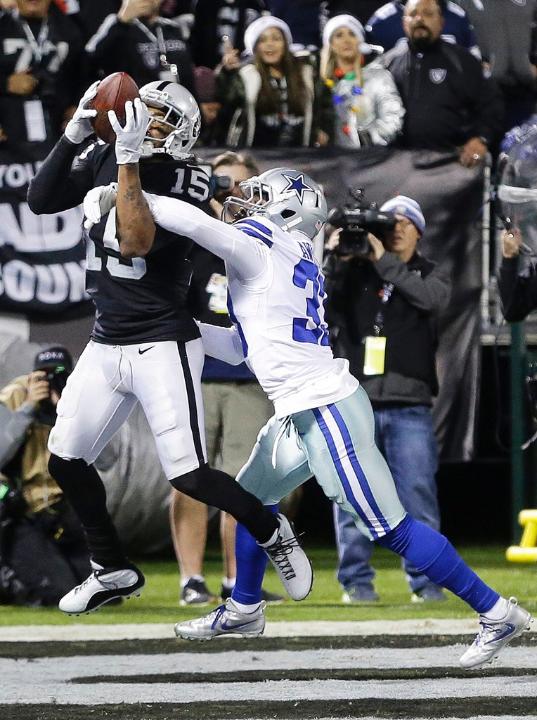 Oakland, CA – The Raiders season came down to mistakes made in the final home game but one call was so bizarre that no one saw it coming. A late call in the fourth to determine a key first down cost Oakland a chance to further their playoffs hopes and took the breath out of the Coliseum.

An unusual measurement for the Dallas Cowboys first down led to the winning drive in a 20-17 victory over the Raiders. The controversial call was something no one has ever seen before. Lead official, Gene Steratore used a folded index card to determine the first down between a the nose of the ball and the pole. It was the wrong call but he awarded the Cowboys the ball anyway.

“It was just for reaffirmation, but the decision was made based on my visual, looking at the ball touching the pole.”

“I don’t want to get fined, OK? I’m not happy with the way things were done, said Oakland’s head coach Jack Del Rio. “A lot of different situations throughout the night. They did the best they could. I had a different view point. I saw air. It was pretty obvious. But again, they do the best they can with a tough job.”

The views from the sideline, press box, TV’s and replay show the ball was short and space was between the nose of the ball and the pole. Yet, the first down was given despite the Cowboys being short of the first down, that led to Dan Bailey’s 19-yard field goal giving them a 20-17 lead.

That wasn’t the only play that left the fans at the Coliseum speechless. On the final play of the game, Michael Crabtree who had two touchdowns for the night, was taken out of the game. He explained after the game that he had no idea why he was removed after a collision with Dallas linebacker Anthony Hitchens.

“I just don’t understand why they took me out last play of the game,” Crabtree said. “They said they put me in concussion protocol, it happened after two plays after the pass interference. I don’t know, I’m lost, I don’t understand.”

The final play was Derek Carr diving for a touchdown in the final seconds of regulation but fumbled the ball crossing the right pylon. The play was ruled a touchback giving Dallas possession with 31 seconds on the clock. Marshawn Lynch was given a penalty on top of that call due to him being angry with the outcome.

“We actually had a play called, a certain play called on the other side, and then the refs made us take him [Michael Crabtree]out,” said Carr. “And then we had to change our call.”

The loss has ended the Raiders hopes for a playoff run. They gave it all they had but it wasn’t enough after a game riddled with mistakes, bad calls and poor decision. Oakland failed in the first quarter to get a first down. Giorgio Tevecchio missed a 39-yard field goal in the second quarter.

Meanwhile Bailey put the Cowboys on the board with a 45-yard field goal. Then followed with a 1-yard rushing touchdown from Rod Smith extending their lead 10-0. By the third quarter Oakland bounced back, Carr scrambled for 32 yards, Lynched rushed for 19 yards to setup Crabtree’s 2-yard touchdown making it a 10-7 game.

Sean Smith recorded his second interception of the night for 22 yards that setup Tevecchio’s 39-yard field goal to tie the game 10-10. On the opening drive of the night, Smith interception QB Dak Prescott at Oakland’s 22-yard line and returned it eight yards. Smith is the first Raider to record two interceptions in a game since Charles Woodson did so on Oct. 11, 2015.

But Dallas fake punt is what caught the Raiders by surprise, that setup Prescott’s 5-yard touchdown. Dallas was 4th and 11 at their own 24 all tied up when punter Chris Jones took off for a 24-yard gain to keep the drive alive. Prescott’s touchdown gave them a 17-10 lead.

“Yeah, they got us on that,” Del Rio said. “They have a good special teams unit. They won the battle tonight. We had too many penalties on special teams. They had that big conversion there. That was a big play in the game for sure. That allowed them to go down and get a touchdown there. I mean ultimately that probably is the difference in the game.”

Oakland answered back quickly to tie the game again 17-17. Carr’s pass to Seth Roberts for 26 yards and the Cowboys challenged that he didn’t have full control of the ball and lost that challenge. Carr then found Crabtree for his second the 2-yard touchdown of the night. But due to the controversial call late in the fourth Oakland lost their way in the end.

“I’m just trying to win for my teammates,” Carr said. “No excuse, I have to hold onto the ball.”

Oakland Moms4Housing Say ‘Housing is a Human Right,’ but the Judge...