Dozens of media trucks surrounded the Civic Center Plaza between City Hall, the Asian Art Museum and the San Francisco Public Library. A super-sized American flag hung in mid air attached to the ladders of two fire trucks across from the front steps of City Hall, a final salute to the city’s first Asian-American mayor, a non-politician, a man among the people. A floral tribute at the steps of City Hall featured hundreds of bouquets, a few photos and handwritten expressions from everyday people.

An over flow of people were seated in adjacent rooms surrounding the Rotunda with a video feed. Those unable to enter City Hall were directed across the plaza to view the streaming video at the San Francisco Public Library and the Asian Art Museum. Celebrities, sports figures and other VIPs gathered to support one another as they continued to process the shock and grief around Lee’s untimely death. 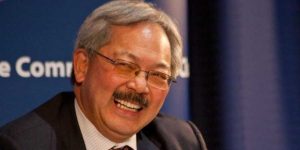 During the services, Acting Mayor London Breed recalled a trip to China with Lee and the recognition he received was as if he were royalty.

“In China he was like a superstar or Beyonce’ with a mustache,” she said.

Mayor Lee’s daughters Tania Lee and Brianna Lee shared his fatherly side and spoke of the bad delivery of funny jokes and his bad jokes and or father’s memorial service.

“We will carry his memory with us for the rest of our lives and we hope that his spirit of selflessness, humor and dedication will continue on through all of us,” they noted.

A postlude was provided by Preston Turner and Pure Ecstacy who sang “He’s Got the Whole World in His Hands.” A version of Hammer’s “Too Legit to Quit” customized and dedicated to Mayor Lee was also played within a video presentation.

“He was an extraordinary man, a man of great character,” said Newsom.

“He was wonderful to with and I will really miss him,” said City Administrator Naomi Kelly.

Supervisor Malia Cohen expressed her initial sadness stating, “The City of Saint Francisco has lost a compassionate leader. I am heartbroken to lose a good friend. We will miss him dearly and will keep Anita and his family in our prayers.”

As veteran media makers, Belva Davis and her husband Bill Moore exited the home going celebration; they paused and reflected on Lee’s service.

“Mayor Lee was the type of person you really couldn’t say anything bad about. He was such a kind person,” said Davis.

Anti-violence advocate, Mattie Scott of Healing 4 Our Families and Our Nation, said the mayor was a great man and always made time for meetings.

“Mayor Lee had a history of making progress in this city,” she said. Carletta Jackson-Lane, executive director of the Sojourner Truth Foster Agency considered Lee to be a compassionate person that cared about the homeless and mentally ill populations. “He was a good man that pushed for change.”

Lee was city administrator when he was appointed to serve the remainder of former Mayor Gavin Newsom’s term in 2011. Later that year, he was elected to the position, and he was re-elected in 2015. A wave of new jobs and money forever changed the trajectory of San Francisco as the multi cultural city and gave way to escalating rent and mortgage prices that left many displaced and homeless. Yet Lee fought to add affordable housing and programs to balance the landscape.

Former president of the Black Firefighters Association, Bob Demmons had similar sentiments. “Ed was a fighter in the beginning. He was a civil rights attorney when we fought for equality before he even became mayor,” he said.

Lee’s casket was not present, as it was laid in state in the rotunda of City Hall on Friday. San Francisco Chief of Protocol Charlotte Mailliard Shultz and Businessman Mark Benioff were also in attendance.

President of the San Francisco African American Chamber of Commerce, Fred Jordan planned to host a meeting with Mayor Lee and the president of Uzbekistan.

“I am grieved to hear about the passing of Mayor Lee, he was a friend and fellow civil rights fighter,” he said.

While Lee advocated for all cultures in the city, he was very proud to represent the Asian Community, advocate for Chinatown and relish in the annual Chinese New Year Parade.

Prior to his employment with the city and county of San Francisco, Lee was the managing attorney for the San Francisco Asian Law Caucus, where he worked from 1979 to 1989. From 1989 to 1991, Lee worked as a whistleblower ordinance investigator and the Deputy Director of Employment Relations in San Francisco. Lee later worked from 1991 until 1996 as the director of the Human Rights Commission, serving in that capacity under Mayors Agnos, Frank Jordan and Willie Brown. Brown appointed him director of city purchasing, where, among other responsibilities, he ran the city’s first Minority/Women-Owned Business Enterprise program.

Afterwards, Lee became director of the City Purchasing Department in 1996 until his appointment to city administrator in 2000.

Lee’s family has established a charitable fund in his name at the San Francisco Foundation to support nonprofits and social causes that were important to him. Contributions should be made payable to “The S.F. Foundation: Edwin M. Lee Community Fund,” and mailed to the foundation at 1 Embarcadero Center, Suite 1400, San Francisco, CA 94111.

Teens Walk and Ride to Win a Bicycle at Bancroft...

Homegrown Flavor from an Indoor Garden

Upcoming Events at the Hannah Gallery

Best Practices in the Critical Management of Diabetes