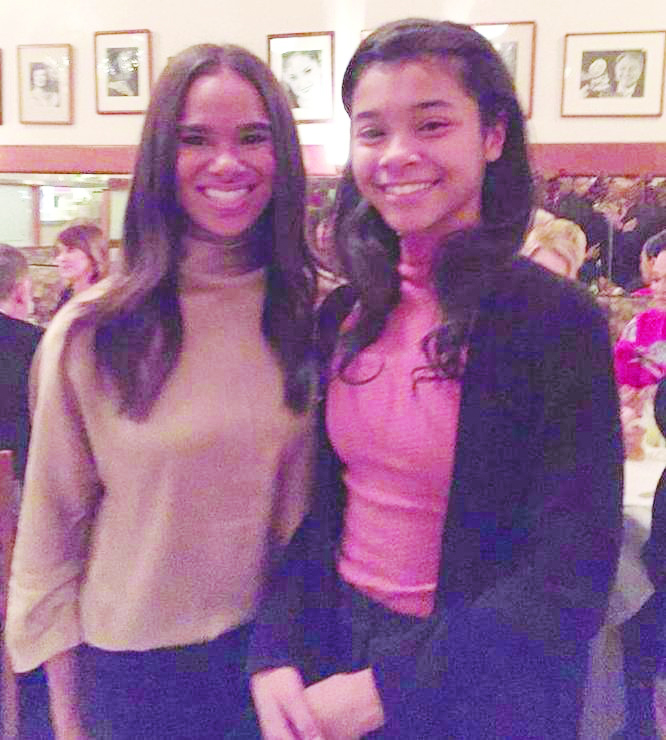 Humble and graceful, Misty Copeland took the stage at the Nourse Theater for a fireside chat with Laurene Powell Jobs on Monday, December 18. A brief video shared the event’s purpose – a benefit for the Gugulethu Ballet Project, an organization that brings the art of classical ballet to the youth of South African townships.

The sold-out event featured an insightful Copeland who candidly spoke of growing up awkward, underprivileged, quiet and unsure of where to fit in. During the 90-minute talk, Copeland shared her swan dive into the world of ballet only to emerge as the first African-American principal ballerina at the prestigious American Ballet Theatre (ABT).

The heartfelt discussion was a delight and pure inspiration for anyone, especially young ballerinas. Born Misty Danielle Copeland September 10, 1982 in Missouri, she was raised with four siblings in San Pedro, California. Through the Boys and Girls Club she was exposed to ballet at 13, which is late for most. However, Copeland was just getting a taste of her true destiny becoming a child prodigy just two years later. To everyone’s amazement, Copeland’s physique and determinate enabled her to accomplish in months what most dancers require years to master, and by the tender age of 15 she was an award- winning starlet.

Fast forward to today and Copeland is an American ballet dancer for ABT, one of only three leading classical ballet companies in the United States. On June 30, 2015, Copeland became the first African American woman to be promoted to principal dancer in ABT’s 75-year history.

In 1997, Copeland won the Los Angeles Music Center Spotlight Award as the best dancer in Southern California. After two summer workshops with ABT, she became a member of ABT’s Studio Company in 2000 and its corps de ballet in 2001, and became an ABT soloist in 2007. As a soloist from 2007 to mid-2015, she continued to perfect her technique.
During the talk, Copeland recanted the coveted opportunity to perform Firebird, a milestone in her career and again being the very first Black woman in the role.

The outpouring of African American support was enormous. Copeland, well aware of the magnitude for all black ballerinas and the community graciously accepted the role of unicorn, being the first, the trailblazer, the one paving the path of color in ballet. “I remember my colleagues asking me if they were my family members.” Copeland was able to power through opening night, but she was soon faced reality; a severe injury – 6 stress fractures to her tibia, requiring a plate to be screwed in and a year of rehabilitation. Copeland came back even more powerful and at 35, she says she’s not just yet ready to retire her pointe shoes.

Copeland was named in 2015 as one of the 100 most influential people in the world by Time magazine, appearing on its cover. She performed on Broadway in On the Town, toured as a featured dancer for Prince and appeared on the reality television shows A Day in the Life and So You Think You Can Dance.
Copeland said it was an honor to work with Prince and that the tour exposed many to ballet for the first time. “Touring and appearing in Prince’s video was an honor. Prince was supportive, and always told me that it was ok to be different.

As a sought after speaker, Copeland takes honor in giving back to the next generation of dancers as a mentor. Prior to the talk, Misty met with young Black ballerina, Angela Watson, who stars as “Clara” in the San Francisco Ballet production of the Nutcracker. Watson, a 4.0 student at the Oakland School for the Arts was excited to meet her inspiration.

During the Black girl magic moment, Watson took photos with Copeland and received an autographed copy of her latest book “Ballerina Body.” The day also marked the 125th anniversary of the world premiere of the Nutcracker in St. Petersburg, Russia where it all began.

“I was so excited to meet her,” said Watson, a sixth level student at the San Francisco Ballet Company. “She has achieved something I have been working hard to achieve. When I first read about her I was inspired to work harder.” Watson has been featured in the media and her style and physique at her age are comparable to her muse.

Watson, began her training in classical ballet, at age 11, at Oakland School for the Arts (“OSA”) School of Dance under Reginald Ray Savage, Artistic Director and Principal Choreographer. After training in technique for the first half of the 2014-2015 school year, Watson was authorized to throw her ballet slippers into the National Ballet Tours of 2016 arena. She came out a winner, receiving 7 Summer Intensive training offers of 7 auditions with the most prominent ballet schools in America; American Ballet Theatre, Alvin Ailey American Dance, Boston Ballet, Joffrey Chicago, Joffrey NYC, School of American Ballet, and San Francisco Ballet School. She was also awarded 3 merit-based scholarships.

Watson chose the 2016 Summer Intensive program at S.F. Ballet School and after training with SFBS for 3 weeks, Watson was invited to join its 2016-2017-year round training program in recognition of her potential to achieve a professional career in ballet. Within weeks, Watson was selected as one of the few ever African-American ballerinas to dance the leading character role of Clara in the 74-year-old first full length American Nutcracker for SF Ballet Company’s 2016 holiday season where she danced into the hearts of little and big hopeful ballerinas across the Oakland/San Francisco Bay Area.

While Watson enjoyed attending a second Summer Intensive with SFB, she has been appointed to the elevated Girls Level 6 on scholarship for 2017-2018 year round.
After receiving an outstanding 9 Summer Intensive 2017 training offers, Watson will now dance her way East to New York City attending the Russian American Federations Bolshoi Ballet Academy. On a merit-based scholarship, supported by U.S. Dept. of Education and the Youth America Grand Prix, Watson will now enter the ballet world’s version of the Olympics, where she will also learn to speak Russian.

Kings no match for Westbrook and OKC

Jason Kidd Celebrated in His Hometown for Hall of Fame Induction

Paula Fass Comes Out of Retirement to Become The Magnes’ New...