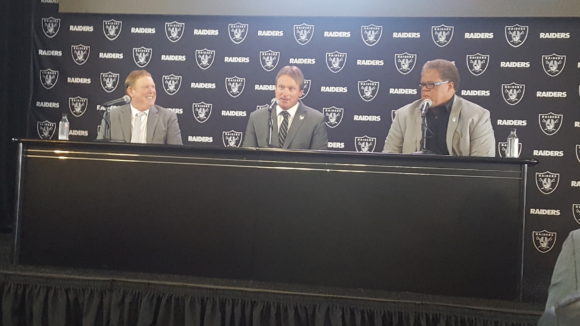 Oakland, CA – Twenty years ago, Jon Gruden was hired by former owner Al Davis at the ripe age of 34. During that tenure, Gruden was the first coach to take the team to a 12-4 season winning their first division title since 1990. After the infamous “Tuck Rule Game” against the Patriots, Gruden was released from his contract only to return 20 years later.

“I never wanted to leave the Raiders,” said Gruden in his opening statement. “I never thought I’d be back, but here I am and I’m ready to get to work.”

They presented a video montage of the best moments with Gruden as the Raiders head coach. Owner Mark Davis introduced the man who will probably be the last head coach before heading to Vegas. Under Gruden the Raiders did have their best years yet it was short lived. Now, it’s unfinished business for the former ESPN Analyst.

“You know, the reality is I haven’t changed much at all since 1998, I really haven’t. I am not a real deep, philosophical person. I’ve always loved football, I’ve wanted to come back, I’ve prepared to come back. I’m ready to roll, I’m just ready to go. I’m at a point in my life where I need another challenge.”

The challenge will be far greater than the coaches who precede him. Gruden didn’t really finish what he started. After the playoff game against the New England Patriots deemed the “Tuck Rule Game”, Gruden asked to be release to return to Florida to be closer with his family. Not only did the organization feel a loss but the players did to.

“I’m already here! Listening to Jon got me fired up,” said Jerry Rice. “He almost made me want to put that uniform on again. He’s just that type of coach, very inspirational. I’m going to be highly involved here just like I am with the San Francisco 49ers. We have a lot to offer when you bring in the older guys.”

The return of Gruden has sparked interests in many to help bring this team and organization back to its winning ways. The excitement in today’s press conference was felt among all who attended. While the older guys can’t lace up their shoes or put on a uniform their presence is enough to motivate the current roster of players to come.

While no current Raiders players were in attendance, Gruden was certain that in time he would bring this team back to its winning ways. Probably something that no other coach  has done, will come by the hands of Jon Gruden. He hasn’t coached since 2008 but he’s still been apart of the NFL with a prime seat as Monday Night’s Football top analyst.

The top question of the day was “how do you turn this team around?” The Raiders last playoff appearance was 2016 before that it was 2002 under Gruden. Areas of improvement fall greatly on the penalties and lack of a strong secondary among many other things. Without a doubt this journey won’t be easy but Gruden’s up for the challenge.

The draft will be a big part of it. Who is available when we pick? What is available to us in free agency? That will be determined down the road, but we certainly need to improve every area of this football team, and it starts with me.”

“Behind the Curtain” Gala at Craneway Pavilion

With Increasing Head Injuries, Will Cities Do Something About E-Scooters?

City Tries to Understand How a 14-year-old Boy Could Kill His...