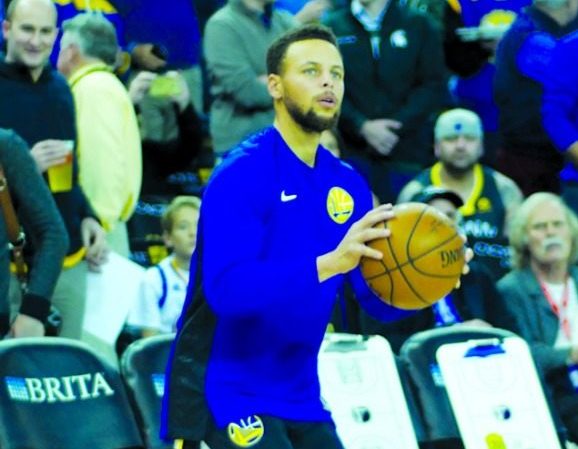 Steph Curry warms up for his 32-point performance during the Warriors’ Monday night’s game against the Denver Nuggets. Photo by Brandon Aninipot.

Oakland’s golden team, the Golden State Warriors, led by Coach Steve Kerr and two-time MVP Stephen Curry, soared over the Denver Nuggets in a 124-114 win Monday night at the Oracle. The Nuggets were no rollover team. They fought up until the last minute, but the Warriors won by their excessive ball movement and signature style of play.

Draymond Green had his best scoring game of the season with 23 points scored, 5 rebounds, 10 assists, and 3 blocks. Klay Thompson also had an effective role in the Warriors win Monday night going for 19 points at 50 percent from behind the 3-point line making three of his six attempted shots.

With Kevin Durant on the bench and Steph Curry playing, the opposite scenario of the last time these two teams met, due to Curry’s ankle injury then and Durant’s right calf strain now. When Kerr was asked about Durant’s return, he said, “He’ll play when he feels right.”

Coach Kerr went on to talk about the team’s overall performance saying “I thought the team played ‘their’ game, although Steph didn’t play his best.” Steph, who had 32 points, 5-of-10, from 3-point range and 9-of-17 overall, said during his postgame interview “I love being held to a high standard, it’s what pushes me to keep improving.”

Monday night’s game, which happened to be Klay Thompson bobblehead night at the Oracle, also happened to be David West’s 1,000th game played, making him the 127th player ever to do so.

Hunger Strikers Take Their Fight to Save Chicago High School to...