The school board of the Oakland Unified School District (OUSD) voted Monday to give itself a raise despite their multi-million dollar budget deficit.

Each of the seven board members will receive about $40 more monthly, totaling $826 a month for each member.

While the raise is relatively miniscule, it comes just a few weeks after the board voted to cut $9 million from its schools’ budget. According to the SF Chronicle, the budget cuts will result in the elimination of dozens of administrative positions, and schools have already been forced to eliminate spending on supplies.

The board voted 5-2 in favor of the raise. The ‘no’ votes were cast by board members Jody London and Nina Senn. “After the bruising past several months that we have just experienced and just the grief and the anger that is in our schools and in our community, it would very much send the wrong signal right now to approve any increase for ourselves,” London told the SF Chronicle.

A symbolic ‘no’ vote was cast by student representative on the board Gema Quetzal, who told The 74 that she thought the money could mean a lot to teachers who need supplies for their students.

Quetzal does not receive a paycheck for her service on the board. “We put in hours because we want to help our community,” she said.
The income for Oakland board members now reaches well past their San Francisco counterparts, who earn $500 per month, serving 58,000 students (about 20,000 more than Oakland). Oakland board members may also receive full health benefits for themselves and their families, which currently costs the district about $22,000 each year.

The board members who voted in favor of the raise argue that the amount is miniscule to the district, but compensates them more adequately for the long hours (over 20 per week) that they put in to serve their community.

Former OUSD Board member Paul Cobb said he will ask the Board members “to place their raises into a special restricted trust account to be used as matching funds to reopen school libraries and to reimburse teachers who purchase supplies for their classrooms. I believe that the Oakland taxpayers who proudly hailed the Mayor’s Promise plan would gladly ‘go fund that’ approach. The Broad Foundation and the former Superintendent Antwan Wilson should join with the Post’s appeal to leverage the raises so our kids can rise.”

Marin Focusing on Outreach for 2020 Census 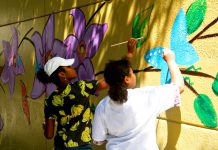 In 11 Years of State Oversight, No Audits of Oakland...