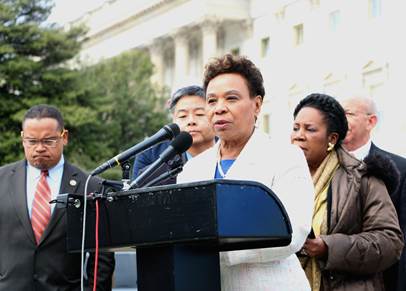 Since my election to Congress in 1998, I have attended every State of the Union. I have always believed that this event should be non-partisan because I respect the office of the Presidency.

I will not attend this State of the Union because this president has not honored nor respected the office of the presidency and has shown a total disregard for our democratic institutions. From relentless attacks on the press to outrageous statements that undermine the intelligence community and the Russia investigation, and repeated threats to our judicial system, President Trump has launched an all-out assault on our democracy.

President Trump’s un-American approach to immigration — most recently calling Africa, El Salvador and Haiti “s”-hole countries — is racist and further demonstrates a lack of respect for the office of the presidency. His willingness to allow his Chief of Staff to lie about the good work of Congresswoman Frederica Wilson, without requiring an apology, reflects a total disregard for the truth.

This is yet another example of this president undermining the dignity of the highest office in our land. According to the Washington Post, over the last year President Trump has lied or misled the American people more than 2000 times, sending a message to our children that lying is acceptable.

Whether it’s his response to Charlottesville, embracing the alt-right agenda, reviving the failed War on Drugs, or ending the Deferred Action for Childhood Arrivals program, President Trump has established over 50 blatantly racist policies, reduced the standard of living for communities of color and dishonored the office of the presidency like no other president in our history.

The president has also supported policies that rip healthcare from 13 million Americans and give tax breaks to billionaires and corporations while forcing middle and low-income families to pay for it. He’s led the effort to turn back the clock on women’s rights and undermined civil and human rights.

History has shown us that democracy is fragile. It can only be maintained by engaged citizens and elected officials who are willing to protect and preserve our sacred institutions.

While I respect our democratic system, I cannot in good faith attend the State of the Union. Instead of listening to President Trump manufacture accomplishments, attack his political enemies and intentionally mislead the American people, I will join principled activists to strategize the next phase of resistance and our vision to move America forward.

The Whispers Will Be Home for the Holidays at the Paramount

William Davenport Is Breaking Through