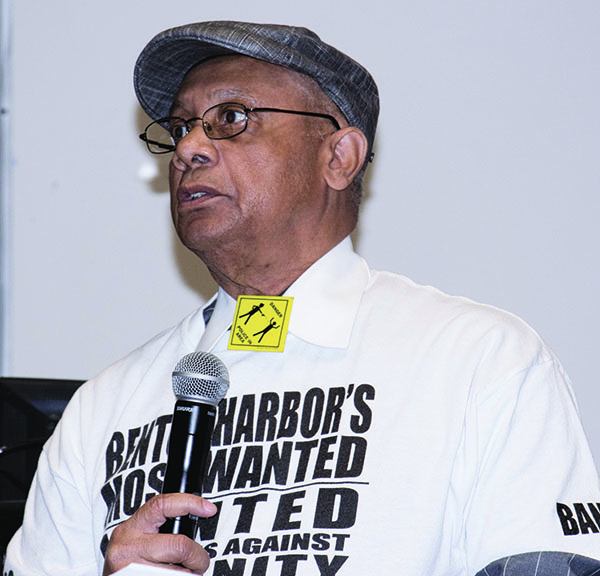 Laney College has become a regular host of teach-ins for social justice. A “teach-in” is an informal lecture or discussion on an issue of public interest.

The latest in the series of teach-ins at Laney featured the Rev. Edward Pinkney from Benton Harbor, Mich. to tell his story.

Pinkney was accused of altering the date on a petition to recall Benton Harbor Mayor James Hightower.

Pinkney and other residents believed Hightower protected the interests of the household appliance manufacturer Whirlpool, headquartered in Benton Harbor, a city with a population that is over 90 percent African-American.

Pinkney was sentenced to up to 10 years in prison for felony forgery. There was no evidence to convict him.

Pinkney’s story informed was captured in the title of the teach-in: “Fighting Corporate Power: Defending Our Democracy & Envisioning a New America.”

Although Pinkney spent 11 months imprisoned for this activism, his ambition for justice was not defeated.

He told Laney students and faculty about how he united prisoners across racial lines to successfully protest the foul-smelling “buck-naked fish” prison menu.

The second part of the event, the Poor People’s Campaign meeting, sought to use Pinkney’s story to inspire solutions to those insecurities.

Laney’s teach-in planning committee will meet next week to strategize ways to connect with this year’s national revival of Dr. Martin Luther King, Jr.’s 1968 Poor People’s Campaign, his focus during his last years.

Giants lose a tough one to the Yankees

The Transbay Joint Powers Authority Can Do Better By Maria Ayerdi...