In the rapidly-developing architecture of homeless support in Oakland, there are two missing building blocks: a large and sustainable link from the City’s General Fund to transitional housing, and a widespread effort to rapidly house over 3,000 people.

At City Council in May and June of 2017, many public commenters noted how the dearth of General Fund spending to uplift our unsheltered neighbors stood in stark contrast with gratuitous funding of the Oakland Police Department.

Even the Affordable Housing Trust Fund was tapped to bring City programming to baseline levels.

Mayor Schaaf must take the bull by the horns in the mid-cycle budget revision this May, by carving out massive funding for transitional housing, site services, and sanitation.

The Board of Supervisors can add leverage by offering comprehensive matching funding, on condition that the City takes that humane next step. Looking forward to the November election, Councilmember Kaplan came to Council this week with a measure to place a tax on vacant land, buildings, and residences, with proceeds to exclusively benefit homeless housing and services.

The measure would also create a Homeless Commission to advise the City on allocation and approach.  From the Compassionate Communities experiment at 35th & Magnolia, to the dubitably habitable Outdoor Navigation Center at 6th & Brush, the City Administration’s forays into service and shelter solutions have been timid, concerned more with appearances and liability than courageous and substantive harm reduction.

There are plans for the Northgate encampment, where three residents have died in the past year, but only to transitionally house a third of that burgeoning community. These programs are slow to start and barely make a dent on this humanitarian crisis. It is up to Oaklanders to push the Mayor and Administration to come forward with dozens of publicly-owned parcels on which to set up transitional facilities, and a system for widespread deployment of low-cost, high quality mobile residential units.

The Oct. 3, 2017 passage of the Shelter Crisis Ordinance prompted community groups to start building – most notably The Village, on the only parcel the Administration was willing to offer, at East 12th St. & 23rd Ave.

A coalition has formed within the Interfaith Council of Alameda County to bring RVs and trailers on to their lands.

Private property owners can reach out to the City to offer land for encampment and services. The Shelter Crisis Ordinance allows the Administrator to lift code requirements in the name of rapid shelter provision, provided the City has a leasing agreement with the owner.

This means that any private parcel may be offered. While the City may prefer Tuff Sheds, the Town has a wide array of options.

Tent camping is as allowable as tiny homes and converted shipping containers. RVs and trailers may be rolled in and parked. Porta-potties and handwashing stations are easily rented, and contractors can provide mobile shower facilities.

Community-oriented site plans tend to include outdoor cooking facilities and plenty of green space, with housing around central gathering places.

There remains a missing message from the Mayor’s Office: “Come forward with land and your vision to support your unsheltered neighbors, and we will support you.”

Communities don’t have to wait for the call; if we step up to the challenge with a flood of offers, the Administrator will have to streamline approval.

Our neighbors have been living and dying on the streets for too long, and City Council has already granted us the primary tool we can use to help. 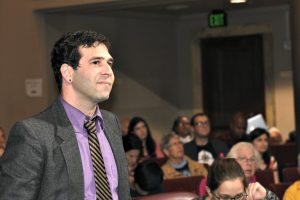 Jonah Strauss is a member of the Homeless Advocacy Working Group and Executive Director of the Oakland Warehouse Coalition. He can be contacted at  [email protected]

Opinion: The Signs Say Black Lives Matter. Yet the Very People Who Are Supposed to Protect Us too Often, in too Many Places, Don’t...

Infection Lapses Rampant in Nursing Homes But Punishment Is Rare