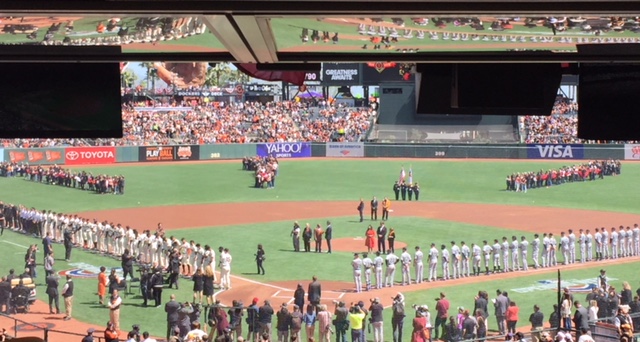 San Francisco, CA – It was a perfect day for baseball.  The Giants pulled out all the stops for the pre-game ceremony bringing back some memorable former players who made this organization unforgettable.  Willie Mays, Willie McCovey, Barry Bonds, Dusty Baker, Marvin Bernard, Vida Blue and Felipe Alou to name a few.

Former closer Brian Wilson threw out the first pitch to cap off a spectacular ceremony that also honored former San Francisco Mayor, Ed Lee.  Unfortunately, the excitement fizzled immediately.  Ty Black got off to a bumpy start that led to the Seattle Mariners scoring four runs in the first frame.

The Giants 6-4 Interleague loss to the Mariners was the third straight loss they recorded this season.  San Francisco rallied in the seventh and eighth but dug a hole too deep to climb out of.  Nonetheless, it’s still early in the season despite the lack of hits the team has produced since the season started.

“How about what Joe is doing?  It’s pretty impressive, isn’t it?,” manager Bruce Bochy said.  “Our first three runs are his home runs.  Who would have thought?  He’s just throwing out good at-bats.  He’s a good hitter.”

Joe Panik went yard in the fourth giving the Giants their first run.  Panik is the first Major League player to lead his team’s first three runs, in any season, with solo homers.  He also snapped his own 21 inning scoreless streak with his solo blast today.  Panik not considered a power hitter but is predicted to hit at least 25 or more home runs based on his strong start this season.

Blach got the first hit when he grounded a single in the third.  But Seattle continued to take advantage of Blach’s poor pitching.  Robinson Cano recorded a RBI double in the fifth and Bochy had enough replacing him with the bullpen.  Reyes Moronta walked Healy before Guillermo Heredia hit a sacrifice fly scoring in Cano to make it a 6-1 game.

Blach lasted 4.1 frames allowing ten hits, six runs, two walks and two strikeouts.  The first inning got away from him, Dee Gordon got a base hit, after grounding directly to Crawford who struggled picking up the ball.  Jean Segura followed with a bunt putting two on with no outs.  Blach loaded the bases and Mitch Haniger hit a two-run single with no outs.

“He really made some pretty good pitches, it was their inning,” said Bochy.  “Balls were hit just where we couldn’t quite get to them.  He was getting us groundballs.”

Kyle Seager got in on the action with a single scoring in Cano extending the Mariners lead 3-0.  Ron Healy then singled, and Haniger scored making it a 4-0 to end the first.  By the second things had calmed down as San Francisco’s defense stepped up preventing more runs despite Segura’s double in the second.

The Giants did get an opportunity in the sixth when Austin Jackson grounded to third baseman, Seager.  The ball deflected off of Seager’s glove, and Jackson was ruled out at first.  The replay showed he was safe and the call was overturned.  Unable to put up more runs, San Francisco kept playing.

“It was good to see some guys get some knocks,” Panik said.  “Longo had a huge hit.  That really kind of brought the stadium alive a little bit.  In the dugout, it got everybody going.”

The Giants needed a rally to get back in the game and that came in the seventh frame.   Buster Posey singled and Evan Longoria hit a two-run homer to make it a 6-3 game.  That woke the ballpark up!  For the last six frames the fans were silent.  Longoria also knocked out Marco Gonzales who finished tossing 6.1 innings, allowing six hits, three runs that included two home runs.

The effort was certainly there, Gregor Blanco doubled on a line drive in the eighth, Kelby Tomlinson followed with a single putting two on in the corners.  Jackson’s sacrifice fly scored in Blanco.  And Panik’s single moved Tomlinson to second but the hits stopped there and time ran out.

“It’s all part of the game and it was good to get some life back,” said Bochy.  “We finally started waking up there and had some good at-bats. And it was good to see some guys coming off the bench to contribute.  It didn’t happen today but that’s what you hope for.”

Councilmembers Delay Vote on Proposal for Construction Job Opportunities for...

No Celebration Yet, Giants Beat Dodgers Behind Rookie