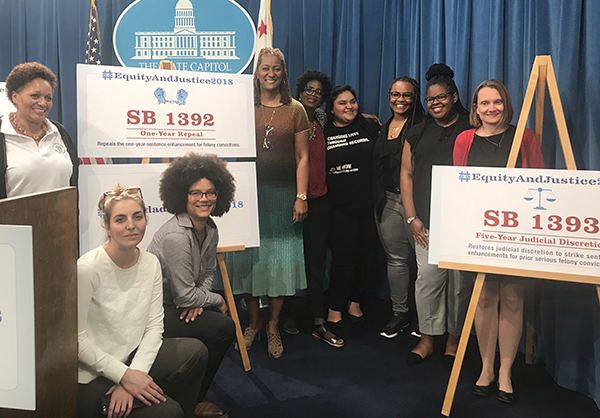 The California Senate recently passed Senate Bill 1393, the Fair and Just Sentencing Reform Act,  which reinstates judicial discretion to the application of the five-year sentence enhancement for each prior serious felony on a person’s record at the time when a person is currently charged with a serious felony.

The bill, which passed with a vote of 23 to 14, is part of the Equity and Justice Package of 2018 authored by Senators Holly Mitchell and Ricardo Lara that seeks justice reforms for juveniles and adults.

“Mass incarceration is a massive moral failure and policy failure. It’s a moral failure because we now know that it is injurious to families and to the economies of low-income

communities, and that its violence has been directed overwhelmingly at Black men and Black women, Latinos and Latinas,” Mitchell said.

“As a matter of public policy, paying for long prison sentences is the worst use of public safety dollars. We must stop wasting taxpayer dollars on a failed policy.”

As of 2016, 79 percent of people under California Department of Corrections and Rehabilitation custody had some kind of sentence enhancement attached to their base sentence; 25 percent had three or more enhancements stacked on.
Communities of color have been the most severely impacted by the application of these punitive policies. According to data from CDCR, there are close to 100,000 years’ worth of the 5-year enhancement applied to people currently under CDCR custody.

The Fair and Just Sentencing Reform bill would help restore balance in the judicial process, address extreme sentences, and reduce racial disparities in the criminal justice system by allowing judges to decide what is best in the interest of justice.

“The financial and emotional stress of having a loved one in prison is extremely difficult, and sentence enhancements only add to the strain,” said Zakiya Prince, a member of the Ella Baker Center. “My husband committed an offense in which no one was hurt or even threatened, but because of mandatory enhancements my family must cope with 10 additional years of financial, emotional and mental hardships.

The passage of this bill builds on the national bipartisan momentum to enact criminal justice reforms that divest from ineffective mass incarceration policies and invest in community-based solutions like mental-health care, education, and substance-use treatment.

This bill also builds on the efforts of the California Legislature, which last year passed SB 180, The RISE Act, or Repeal of Ineffective Sentencing Enhancement Act), authored by Mitchell, which repealed the three-year sentence enhancement for prior drug convictions; and SB 620 authored by Senator Bradford, allowing judges to strike unwarranted gun sentence enhancements.  These efforts are in line with California voters who have also shown their support for such reforms in recent years by voting for Propositions 47, 64 and 57.

Music on the Main Ready Will Bring Richmond Alive with Soulful...

Who controls the fate of Oakland schools?