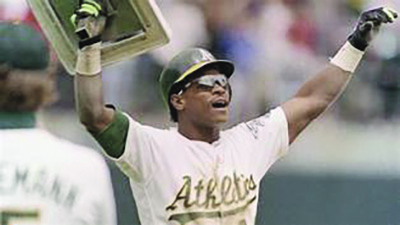 Opening July 13 in the OMCA Gallery of California History, Homegrown Heroes will give Museum visitors and the community an opportunity to get up close with rare photographs, high school yearbook images, and sports memorabilia worn by the players to learn about their roots in The Town and notable contributions to the team. The exhibition will run through the fall.

A 1989 “Battle of the Bay” World Series poster from the OMCA Collection will also be on view, marking a historic moment when the 6.9 magnitude Loma Prieta earthquake struck the Bay Area and Candlestick Park. Eleven days after the earthquake, the A’s beat the San Francisco Giants to win the 1989 World Series. Interactive features will invite visitors to contribute their own baseball memories of playing America’s favorite pastime or attending an A’s game, and prompts will inspire conversation and reflection about the team and the three players.

“The Oakland Museum of California is pleased to join in the celebration of this team and the A’s organization, who have shown their commitment to being ‘Rooted in Oakland’ and this community,” says OMCA Director & CEO Lori Fogarty. “What better way to honor this significant milestone than by highlighting three of the team’s icons, all Bay Area natives who were instrumental in securing the 1989 World Series win and in demonstrating the incredible history of baseball in Oakland. We’re grateful to the A’s for teaming up with us on this show and we welcome fans of both the A’s and OMCA to join us in celebrating our Homegrown Heroes.”

“Our 50th anniversary in Oakland is an opportunity to reflect and celebrate the tremendous achievements of our club. We are proud to partner with the Oakland Museum of California to showcase not only iconic moments in our history but also the athletes, personalities, and hometown heroes who make up our great franchise,” says A’s President Dave Kaval. “The Oakland Museum of California is a strong community pillar who joins us in being ‘Rooted in Oakland,’ and we thank them for their support and partnership.”