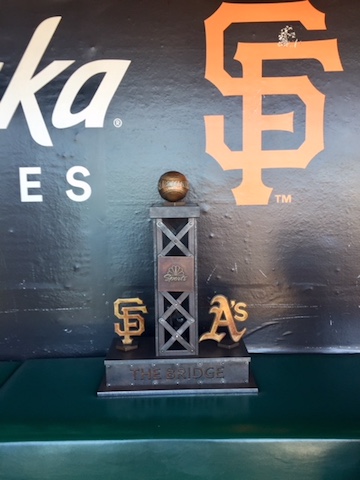 San Francisco, CA – The The Bridge Trophy is now up for grabs.  While both managers haven’t seen the actual trophy, they both know its a piece of hardware that’s only received by one club.  Tonight a two-run homer in the seventh helped even the series in the Bay Bridge series.

The A’s 4-3 win over the Giants came behind pinch-hitter Mark Canha’s two-run homer.  San Francisco took a 3-2 lead in the fourth and never scored again.  But the opportunities were there despite a shaky start for Jeff Samardzija who lasted only four frames.

“It’s a process right now,” Samardzija said.  “Didn’t warm up quite the way we wanted to, but you go out there and you do what you can do with what you got.  I’m not making any excuses, but I thought we went out there and made a few pitches, got out of some things and Boch had a chance to make a move and score some runs and it worked.”

Samardzija allowed a batter on base in each of the innings he pitched with a single, walk, double and hit batter.  He allowed three hits, two runs and struck out one.  It was obvious he wasn’t in a rhythm but luckily it didn’t get any worse.

“He was just a little off tonight,” said Giants manager Bruce Bochy.  “It just seemed like in the early go, in those innings, he was trying to find it and he wasn’t locating his breaking ball very well. But he battled.”

Josh Phegley led off the seventh with a single and Canha followed with a two-run homer accompanied with a back flip.  That put Oakland up 4-3 and San Francisco struggled from there.  Mark Melancon tossed a scoreless frame in the eighth and despite two walks in the ninth Brandon Crawford struck out swinging to end the game.

“We were just missing that one more hit tonight,” Bochy said.

Derek Holland came in after Samardzija and struck out five in two frames and allowed one hit.  Tony Watson gave up two hits that resulted in the A’s regaining the lead.  Steven Duggar recorded another night of two big hits, he doubled to leadoff the second and Alen Hanson drove him in with a RBI single to tie the game 1-1.

Back-to-back doubles in the fourth from both Gorkys Hernandez and Duggar tied the game again 2-2.  Pinch-hitter Austin Slater singled and drove in Duggar to make it a 3-2 game.  But with the bases loaded Buster Posey flew out to end the inning.

Despite Derek Holland being superb on the mound, the bullpen struggled to keep pace.  Tomorrow is the final game before the All-Star break and a much needed break for both teams.  The Bay Bridge trophy will be a nice piece of hardware for wither team to claim.  These two teams will meet again after the break July 20th – 22nd in Oakland.

Giants back to .500 with win over D-backs

Vogelsong, Giants Stifled By The Nats