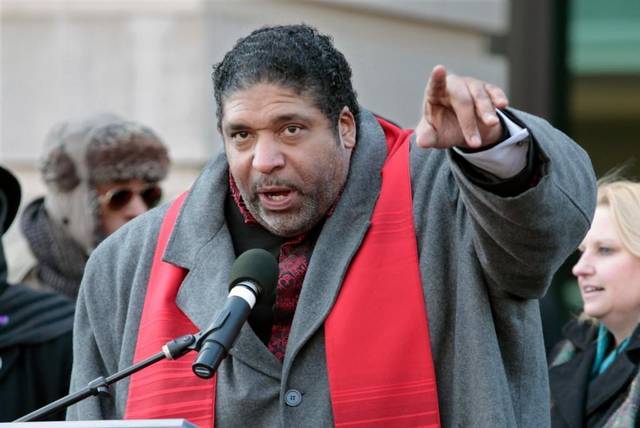 Echoing the call for a moral force to resuscitate the heart of America that he sounded at the 2016 Democratic National Convention, Rev. William Barber led a spirited conversation on “Reviving Our Democracy” in front of an enthusiastic crowd of more than 750 at the First Congregational Church of Berkeley on July 12.

Part political rally, part teach-in, and part revival meeting, Rev. Barber’s evening of conversation with Ari Berman, senior reporter for Mother Jones magazine, was interrupted by frequent applause and spontaneous standing ovations, as the talk ranged over core issues of the Poor People’s Campaign: systemic racism, poverty, ecological devastation and militarism. Rev. Barber is co-chair of the current campaign which aims to re-consecrate the work of Rev. Martin Luther King who was organizing a diverse coalition for the original campaign before his assassination in 1968.

Rather than address each of its core issues separately, the Poor People’s Campaign brings them together in a “fusion” strategy – which draws its name, in part, from the Fusion Party that united freed black slaves and poor whites in North Carolina after the Civil War, as Rev. Barber explains in his book, The Third Reconstruction.

When Berman raised the subject of that election during their evening of conversation, Rev. Barber characterized Donald Trump as “nothing new” and compared his campaign speeches to those given by George Wallace in 1968. “Trump benefited from a culture that was developed over 50 years,” he said. “The (Nixon) white southern strategy had a goal of lasting 50 years. This is the 50th year.”

Rev. Barber went on to contend that Trump’s campaign reflected the same elements of racism, gerrymandering and voter suppression he fought for years as head of the North Carolina NAACP. “When you mix (those elements) with fear and white rage and lies, it’s a powerful poison,” he said. “It’s a poison that’s often been placed in the veins of this American democracy.”

The antidote to that poison, he told the assemblage, is the mobilization of moral witnesses to expose the forces that now keep 140 million Americans poor or stuck in low-incomebrackets. “This is beyond left and right,” Rev. Barber said. “It’s about right and wrong. It’s a heart issue. This is not about Trump or one election. It’s about giving America a dream again.”

In a climactic moment toward the end of the evening, Rev. Barber led the crowd in a Poor People’s Campaign rallying cry.

“Forward together!” he called out.

“Not one step back!” they responded.

2014 Artists of Residence Chosen for Stockton is Magnificent

How a USF student Brought a Resistance Movement to Campus

Surge in Use of Public Transit

Q and A with Local Award Winning Toastmaster Vivian Prater