Community activists and others are raising concerns about whether the latest affordable housing proposals backed by Mayor Libby Schaaf’s administration would even make a dent in the wave of gentrification and displacement that is remaking the city right in front of their eyes.
Looking at the basic numbers, one of the most contentious issues in the city staff’s proposal is how many affordable units can be built on available public land.

The administration’s report claims that there are only 20 parcels available for housing development and that six of those need to be sold to market rate developers in order to subsidize affordable housing on the remaining 14 parcels.   promising only 746 units in the price range that many Oaklanders could afford.

That number of potential units seems like a pittance to affordable housing advocates who point to the magnitude of the crisis—the unending surge of homelessness, and the huge numbers of seniors, young workers, teachers and city workers who are being forced out of the city.

The Schaaf administration proposal acknowledges the City owns over 1,000 parcels of land, but says only 20 of them are suitable for residential housing.
Of those 20 buildable parcels, totaling 24 acres, 14 would be utilized for affordable housing. Of the remaining six parcels, one would be sold for market-rate housing, totaling 492 units, and five be sold for market-rate commercial development, according to staff.

However, there are reports that show there is significantly more public land available, and many more units could be built on those properties, according to Margaretta Lin of the Dellums Institute for Social justice.

A former Deputy City Administrator, Lin led the work on the city’s Housing Equity Roadmap plan in 2014 that was adopted by the City Council in Fall 2015.
Lin said two reports show there are “50 publicly owned vacant or underutilized parcels that the City’s Housing Element identified as suitable for housing development, which could produce over 7,300 new housing units.”

The city owned 36 of these parcels which are capable of producing over 3,600 housing units per the City’s Housing Element, and other public agencies own the other 14, she said. However, the City sold one of those parcels, capable of producing 25 units, in January 2018 to what appears to be a market rate developer. (The reports are available at www.dellumsinstitute.org/community-justice-data/)

“We commissioned the two public land reports from UC Berkeley Public Policy and City Planning in 2015 because none of the City departments had a full list of City owned land.  With the departure of Claudia Cappio who was briefed on this information, the City administration may be lacking complete information,” she said.

“They are undercounting the number of suitable parcels that the city owns, and their estimate is way lower than the number of units that could be built on them,” said Kaplan.

The “staff strategy assumes” utilizing market-rate development on the six parcels in order to generate revenue to pay for “100 percent affordable housing for the other 14 sites,” said Mark Sawicki, director of Economic and Workforce Development Department, speaking on behalf of the Schaaf administration at last week’s Community and Economic Development (CED) Committee meeting.

Staff’s proposal, on the other hand, would only cost the city $6 million (plus the sale of six parcels of land), which could be raised in three to four years, he said.

The question of funding, said Lin, depends on how the city  defines the problem and the solutions.

“If the public policy problem is defined as a State of Emergency especially for people who are the working poor and/or newly homeless, then we would utilize every resource available, especially public lands,” she said.

But the traditional funding model does not work when “it costs $500,000 to $650,000 to build one housing unit, and the City needs to provide $150,000 to $165,000.   Instead, if the City looked at new innovative housing development and financing models, such as new and attractive mobile homes that cost $35,000 a unit, that other communities are deploying, then the (costs)math would be completely different,” said Lin. 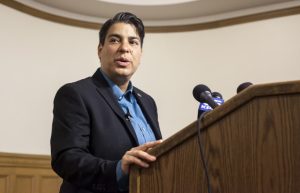 Councilmember Kaplan, a longtime supporter of utilizing public property for affordable housing, says the staff “strategy” proposal does not consider other sources of funding: the city’s Measure KK, Alameda County’s A1 housing bond where Oakland is anticipated to receive over $200 million for affordable housing, impact fees, new State housing funds, and foundation grants.

“If they need to sell parcels, why not sell some of those that can’t be used for housing?” Kaplan asked.
Another issue that deeply concerns affordable housing advocates is whether the staff’s strategy would have teeth or would result in something the administration could modify or ignore as wished.

After meetings between staff and housing advocates on developing an affordable housing policy dragged on for almost two years, city staff announced a few months ago that they were no longer interested in passing a policy, instead proposing a “strategy” on how to utilize the 20 parcels of land.

“The mayor and the people who work for her have been trying to kill the policy all along,” said Councilmember Kaplan. “Even if we adopt a strategy, we need a policy,” she said.

The desperate need is for the City Council to adopt a binding public lands policy, said Lin.
According to Lin,  as of December 2017, “there were 20,000 market-rate housing units under construction or in the pipeline, compared with less than 1,500 affordable units.”

“We’re in Oakland’s worst housing crisis in its entire history,” she said. “And affordable housing developers are having a hard time competing with market rate developers for access to land.

Giants Have No Answer For The Nats

‘Poetry for the People’ Raises Funds for Police Commission Ballot

Giants back to .500 with win over D-backs

Taste of the Bay supports SF State Scholarships and Programs

Oakland Moms4Housing Say ‘Housing is a Human Right,’ but the Judge...