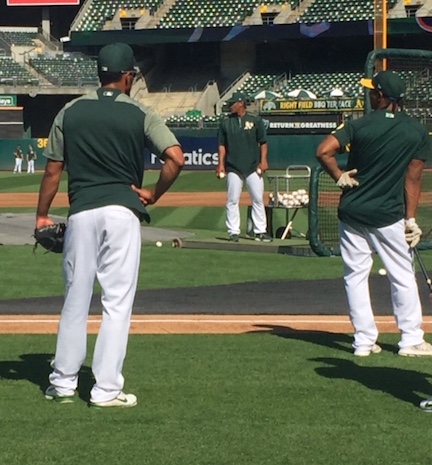 The A’s are hosting their very first African American Heritage Day at the Coliseum this Tuesday night, when the team hosts the Los Angeles Dodgers.  The executive team hasn’t disappointed in the events/promotions that have taken place over the past two seasons.

“I applaud that, I think it’s time that we celebrate the game as African-Americans instead of pushing away from the game as we have for so many years,” said Bip Roberts, former A’s player and current NBCSports Analyst.

“I’ll be wearing a hat that celebrates that day on the air.  This’ll be my first time to celebrate.  You want to include everyone and we’ve never had an African-American Heritage Day.  I think when you start talking about inclusion, you have to make sure that everybody’s covered.  With the 50th year anniversary of the team, the A’s are finally pulling some tricks out of the bag.”

MLB has made its own mark in diversity, inclusion and social responsibility.  There are more African-Americans players getting drafted and the league will create more programs in the inner cities.  In the meantime, the A’s have reached amongst the community to make this night special.

“It’s really good to see, they do have a lot of different promotions,” Marcus Semien said.  “The Black Panther night was really cool just to see a lot of new faces in the crowd that maybe haven’t been here before.

The times below is the schedule for the pre-game show:

Torres, Hutchinson and Trenado Run in Oakland District 5 School Board...

Dimensions Dance Theater “The Town on Notice” for One Night Only